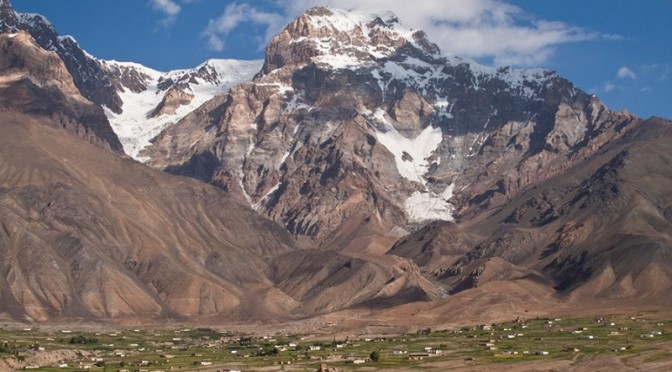 Renewable energy currently provides the main hope that the world can avoid the catastrophic consequences of climate change. But in addition to its bigger picture promise, renewable technologies can help solve the pressing social and environmental problems of local communities without requiring complex gadgets or significant investment.

In late December 2014 the village of Roshorv (located at an altitude of more than 3000m) in the Bartang Valley of Tajikistan’s Gorno-Badakhshan Autonomous Oblast (GBAO) was presented with a solar cooker. Sadarbek Tohirbekov, a teacher of Russian language at the local school and the head of a family of six, received the facility from the Tajik environmental organization Little Earth.

After the cooker was installed in the yard, an employee of the NGO Oyandasoz — Little Earth’s partner in the region — tested the efficiency of the device and discussed potential for expanding their use across the area.

Tajikistan, the poorest state to emerge from the former Soviet Union, suffers blackouts during winter due to the declining capacity of its domestic energy infrastructure, yet hosts strong potential for renewable energy with over 200 sunny days during the average year and significant hydro resources. In addition to Tohirbekov’s solar cooker, which other residents in the village have access to, Roshorv has its own mini-hydro station that helps power the village and the surrounding area during the evenings.

Tests on the parabolic collector dishes that power the solar cooker were held over a series of days. Measurements were taken at 1000, 1400 and 1600 hours in Tohirbekov’s yard. During mild winter conditions the dishes were able to bring a 3-liter aluminum kettle to boil in 20-25 minutes, and cook a soup with rice and potatoes in an aluminum pressure cooker in around 20 minutes.

“To prepare a lunch or dinner [without a solar cooker], we use about half a kilo of bush kindling and then a couple of kilos of firewood and three kilos of dried manure or coal. For example, just to boil five to seven liters of water requires about three to five kilos of bush. A solar kitchen can greatly reduce the consumption of firewood and other fuels, even if you use it only once a day,” says Tohirbekov.

Land clearing and logging by local people has become a major problem in the mountainous areas of Tajikistan, where wood is often the only available source of energy. Hillsides stripped of their tree and bush cover have increased the hazard posed by dangerous and often fatal mudslides.

According to Rozik Yaftaliev, director of Oyandasoz, a solar kitchen of the type at Tohirbekov’s house can be used whenever there is a sun and a clear sky for cooking or boiling water.

“This easy-to-use device helps save time and wood, and when cooking there is no smoke! Since last October, my family in the village Nisour has used a similar solar kitchen. On the days when we use it, we cut consumption of bush wood by 70-80%,” he said.

Currently demand among local residents for assistance obtaining solar devices is soaring. This is not surprising, because solar kitchens are inexpensive, easy to use, and do not have any mechanisms that might need repairing if they break. Most importantly, the fuel – sunshine – is free and renewable.

The solar cooker is not perfect, however. It can support a weight of just over eight kilograms while the rings are of a single size and thus do not suit all utensils. And, of course, on a cloudy day a solar cooker can be rendered impotent. However, such technologies can significantly reduce the burden on the local environment and improve the living conditions of the mountain villagers.

“Solar kitchens can be a good helper for people in remote mountain villages that have difficulties with access to modern energy services and for whom access to fuel is a critical priority. We, for our part, will do everything possible to continue the dissemination of resource-saving and energy-efficient technologies in the mountain communities of the republic,” said Musavvara Shukurova, Little Earth’s director.

In the first half of 2015 Little Earth intends to distribute about 10 solar cookers to the most vulnerable families in the villages of the upper reaches of the Bartang Valley.

“Even if we imagine that each cooker can save about 15-20 kilos of wood per day, accounting for only 100 days of sunshine a year, it would equal about two tons of fuel saved. Accordingly, 10 solar kitchens help people save more than 20 tons of wood annually at that rate. This is a good opportunity to reduce felling and prevent CO2 emissions,” says Anton Tymoshenko, assistant coordinator of energy-saving programs at Little Earth.

This material was prepared by Timur Idrisov, senior advisor at the environmental organization Little Earth. Little Earth is a participant of the program Climate Workshop organized by 350.org to promote decisions about the use of renewable energy and reduce the impact of humanity on climate. Contact the organisation via little.earth.tajikistan@gmail.com or visit their website leworld.org.