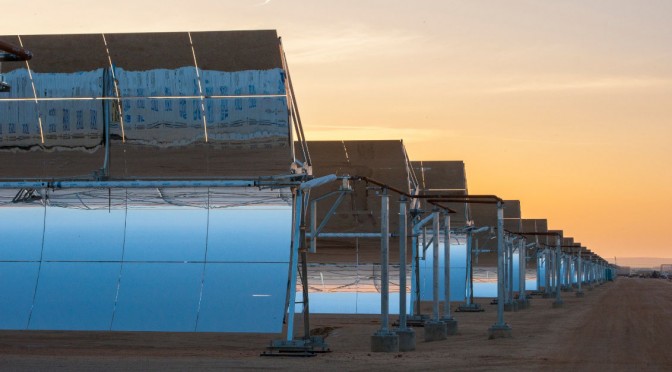 Abengoa (MCE: ABG.B/P SM /NASDAQ: ABGB), the international company that applies innovative technology solutions for sustainability in the energy and environmental sectors, announced today that it has, with its partners the Industrial Development Corporation (IDC), the Government Employees Pension Fund represented by the Public Investment Corporation (PIC) and Kaxu Community Trust, closed the non-recourse project financing for Xina Solar One.

Loan proceeds will be used for the construction of the 100 MW solar thermal electricity (STE) power plant Xina Solar One. It features parabolic trough technology with a five-hour thermal energy storage system using molten salts that assists in meeting the evening peak demand. This plant will produce clean and dispatchable energy to serve more than 95,000 households and will prevent the emission of 348,000 tons of CO2 per year.

With a total investment of approximately USD 880 million, construction of Xina Solar One started in 2014. Job creation will peak at over 1,300 positions during the construction phase, generating 45 permanent jobs for plant operation and maintenance.

Xina Solar One will belong to a consortium, 40 % of which is controlled by Abengoa. Other members of the consortium are IDC, PIC, and KaXu Community Trust.

Xina Solar One will be located close to Pofadder, in the Northern Cape Province, next to KaXu Solar One, the first STE power plant in commercial operation in South Africa. These two 100 MW plants will jointly shape the largest solar platform in sub-Saharan Africa, helping South Africa meet its ongoing energy demands and serving clean and reliable electricity.

These two projects, along with Khi Solar One (50 MW), under advanced stage of construction, were awarded by the Department of Energy of South Africa under its world class Independent Power Producer Program, integrated in its strategy to introduce up to 17,800 MW of renewable energy by 2030 and reduce its dependence on fossil fuel.

Abengoa offers proven proprietary solar technologies (solar thermal and photovoltaic), innovating in the development of solar technology and, developing and operating solar plants. The company currently has a total installed capacity of 1,603 MW in commercial operation, 360 MW under construction and 320 MW in the pre-construction phase, distributed in 32 plants worldwide.