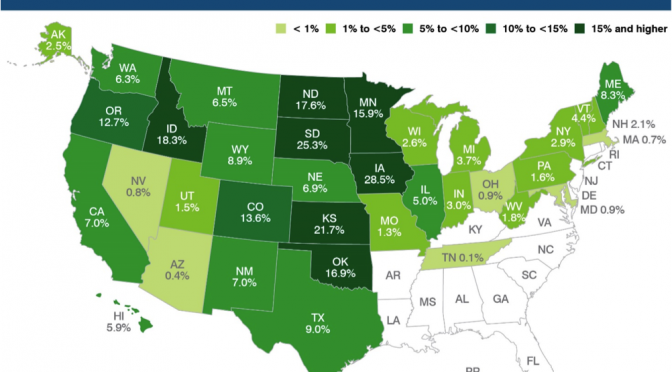 Leaders of the U.S. wind energy industry said their companies and workers can deliver on a bold new vision for wind power to double in America over the next five years and ultimately become one of the country’s largest sources of electricity, with the savings to consumers reaching tens of billions of dollars a year.

Wind Vision: A New Era of Wind Power in the United States was released today by the White House and the U.S. Department of Energy after two years of research and peer review. The definitive new report updates and extends a 2008 Bush Administration report, “20% Wind Energy by 2030,” which galvanized the rapid growth of wind to the point that it now generates 4.5 percent of America’s electricity. Wind Vision describes a new scenario for wind to reach 10 percent by 2020, 20 percent by 2030, and 35 percent by 2050, and provides a road map for government and industry to get there.

“We can do this and save you money by doing it,” responded Tom Kiernan, CEO of the American Wind Energy Association (AWEA). “This definitive report provides the wind industry with aggressive targets for the growth of wind energy in America, and we stand ready to meet them. It starts with getting common-sense policies in place, so we can double U.S. wind energy in the next five years.”

“This report documents how wind energy already provides major economic and environmental benefits to America, including protecting consumers against energy price spikes, and making deep cuts in pollution and water use,” commented John Kostyack, Executive Director of the Wind Energy Foundation. “As wind becomes one of the country’s top sources of electricity, Wind Vision promises even bigger benefits for decades to come.”

Over 50 industry executives and professionals will serve as ambassadors to educate Americans and elected officials about those benefits, under a year-long joint campaign announced today by AWEA and the Wind Energy Foundation to disseminate the findings. In addition, over 400,000 supporters of wind energy have signed up at www.powerofwind.com to ask state and federal lawmakers to support the needed policies.

The Wind Vision scenario describes how consumers will benefit immediately from more stably priced energy. With more wind energy, electricity prices would be 20 percent less sensitive to fluctuations in the price of fossil fuels, the report finds. Consumers would see $280 billion in economy-wide savings from reduced natural gas prices alone.

Investing in more U.S. wind turbines would pay further economic dividends, such as by creating more jobs and causing further reductions in air pollution. The up-front investment to achieve these benefits will cost electric consumers only pennies a month in the early years, the report shows.

Wind Vision anticipates that the cost of land-based wind energy can still be further reduced 33 percent by 2030. The report finds the industry has already exceeded the cost reductions and growth trajectory outlined in the 2008 report, because of technological improvements and smart, performance-based policies. Through 2013, the U.S. wind industry exceeded that report’s aggressive cost reduction projections by 32 percent and its wind deployment projections by 27 percent.

“The wind industry has a track record of success,” said Kiernan. “We are now a proven technology ready to scale up even further.”

Other findings of the Wind Vision report include:

Elements of the road map for achieving the Wind Vision include:

“Although the report does not analyze the impacts of policies or make policy recommendations, two key measures needed to achieve these results are a stable federal Production Tax Credit and states’ greater use of wind to comply with the Clean Power Plan,” said Kiernan.

“The U.S. can stay on track to a cleaner, more diverse energy portfolio if Congress provides wind energy with the long-term, stable policy it provides to other energy sources.”