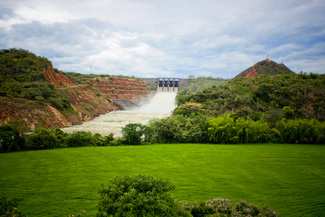 The development potential of small hydropower worldwide has been estimated to be 173GW, and while Africa, Asia and Latin America show the greatest potential, plants in Europe can also offer a significant contribution to domestic electricity systems, responding to sustainability, distributed generation and energy security needs.

The path towards green energy development is not limited to wind and PV solar power, the two technologies that have conquered the most attention among the public and the media. Both geothermal and hydropower – the two oldest technologies – have serious potential in the future of zero-emission energy, which thanks to innovation, technological development and market globalisation is offering new room for progress.

The global growth of hydropower, for instance, is based on both the opening up of new markets that require the construction of large dams and infrastructure, and the harnessing of small water courses and even slight gradients that, thanks to small-hydro technology, are an important resource in developed and developing economies.

The development potential of small hydro has been estimated to be 173 gigawatts by joint research carried out by UNIDO and ICSHP, more than twice today’s installed capacity of 75GW: East Africa has an untapped capacity exceeding 6.2 gigawatts, accounting for 97 percent of the resource’s availability; Latin America does not lag behind, with more than 9.3GW as yet untapped, accounting for 82 percent of the available total. But a number of Mediterranean European and East Asia countries have growth potential for a small-scale technology that has a big role to play in domestic electricity systems, distributed generation and energy security.

Enel Green Power manages 398 hydropower plants that have a total installed capacity of just over 2.6GW and generate on average 11 terawatt-hours each year. In Europe and Latin America it manages large plants, such as the 300MW Fortuna plant in Panama, which is the second largest work of civil engineering after the Canal and generates a quarter of the Central American country’s energy. Over the years it has also developed projects in the field of small hydro, and today its portfolio includes 288 small-scale plants spread throughout Italy.

The value of run-of-river plants is in the fact that, despite their limited unit capacity, on the whole they offer a solid contribution to satisfying electricity demand and have a lower impact on the environment. In fact, small scale hydropower plants are built and organised in such a way that they have a low impact on the land around them. Additionally, they can be managed by small communities and can be implemented in different ways of using of water.