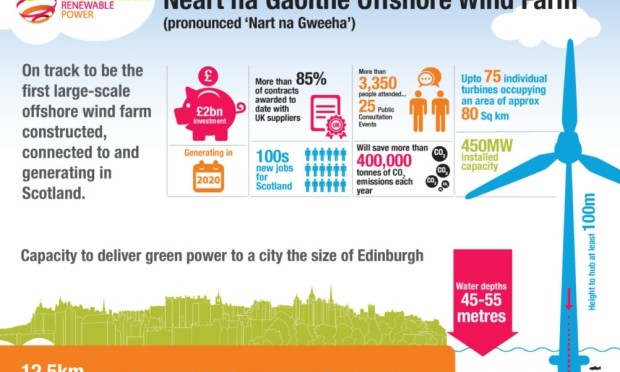 Mainstream Renewable Power – which is behind the 75-turbine The Neart na Gaoithe wind farm off Fife Ness – has secured a 15-year ‘Contract for Difference’ (CfD) to sell the power it generates to the National Grid.

Councillor David Alexander sees this as a huge opportunity for the Kingdom and, in particular, Energy Park Fife in Methil.

He said: “The energy park is ideally located to benefit from this. It’s got world-class facilities and is ideal for manufacturers to be based there.

“We’re not just talking about the construction phase as there will be on-going maintenance and service contracts too. This is an massive opportunity.”

Scottish Enterprise owns Energy Park Fife and describes it as a unique facility in an ideal location for companies working in the renewable sector. It claims no other location in central Scotland has the capability to support the renewable energy activities carried out at the energy park.

Seonaid Vass, director of renewables and low carbon technologies, said Scottish Enterprise would continue to work with Mainstream as it enters the next phase of the development of the Neart na Gaoithe project.

She added: “Offshore wind continues to offer a significant economic prize and this latest announcement will further help develop Scotland as a globally competitive location for renewable energy.”

Mainstream is currently working in partnership with Siemens Wind, Siemens Transmission and Distribution Limited (STDL), Prysmian and GeoSea on the project.

It will be the first large-scale offshore wind farm constructed and operated in Scottish waters to be directly connected to the Scottish electricity system.

A company spokesman said the award of the CfD was a significant milestone and Mainstream would work with its main contractors to “secure a supply chain for the timely delivery of Neart na Gaoithe”.

He added: “Whilst no other lower tier contractors have been named, we expect our main contractors to be in discussion with local suppliers with a view to them participating in a comprehensive tender process.

“We are in constant dialogue with Scottish Enterprise, Scottish Development International, Invest in Fife, as well as other regional agencies, to promote local and national supply chains.”

She added: “Fife Council has fully supported this offshore wind development. We have been working with Mainstream over recent years to outline the opportunities and capabilities of the local supply chain and opportunities associated with the manufacturing, assembly and on-going operations and maintenance of this project here in Fife.

“We wanted to make sure that if such as large scale development was coming to the area then Fifers would get maximum benefit from it. Fife is fast becoming the place to go for renewable expertise and innovation with a wealth of experience and talent already existing in the region.

“We look forward to working with the Neart na Gaoithe project team to ensure the successful delivery of this ambitious offshore wind project.”

The Neart na Gaoithe wind farm is expected to create hundreds of direct and indirect jobs during its construction as well as throughout its operational life.

The wind farm will consist of up to 75 wind turbines and will occupy an area of approximately 105 square kilometres. At its closest point to land it will lie over 15 kilometres off the Fife coast in water depths of 45-55 metres.

The subsea cable transmitting the wind farm’s power will come ashore at Thorntonloch Beach in East Lothian from where its underground cable will travel along a 12.5 kilometre route to a substation located within the Crystal Rig onshore wind farm in the Lammermuir Hills. Planning permission for the route of the underground cable was received from East Lothian Council in 2013.