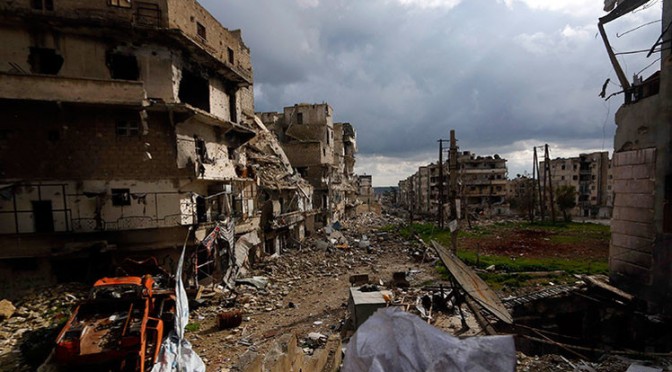 A severe drought that helped fuel the Syrian conflict has been linked to climate change, according to a study published this week. The study, published Monday in the Proceedings of the National Academy of Sciences, adds to the ongoing debate surrounding climate change and armed conflict, suggesting that global warming may already be sparking unrest.

The drought in question lasted from 2007 to 2010 and was one of the worst in Syria’s modern history. Based on meteorological data, the study’s authors determined that the extreme nature of the drought likely wasn’t due to natural changes alone, linking it to a century-long trend toward hotter and drier conditions that mirrors computer models of climate change. Although Syria and neighboring countries are historically subject to dry spells, Colin Kelley, a climatologist at the University of California, Santa Barbara and the study’s lead author, tells the New York Times that “a drought this severe was two to three times more likely” due to climate change-related dryness.

“The entire world needs to be planning for a drier future in that area.”

Although the authors acknowledge that a host of factors led to the Syrian civil war — including corruption, inequality, and population growth — they assert that the drought “had a catalytic effect.” Previous studies, cited in the paper, show that the drought, together with poor water management policies, led to crop failures that spurred 1.5 million people to migrate toward already packed urban areas. This exacerbated already dire social conditions, leading to the revolution against President Bashar al-Assad. More than 200,000 people have died since the conflict began in 2011.

The link between climate change and human conflict is a subject of ongoing debate. A United Nations panel on climate change last year warned that continued changes in the earth’s climate could lead to increased conflicts over land and resources. And an October report from the Pentagon described climate change as a “threat multiplier” that would lead to greater instability.

This week’s study suggests that we’re already starting to see these effects in action, though some scientists remain unconvinced of the connection. The authors themselves acknowledge the difficulty in drawing clear links between climate change and the increasingly complex Syrian conflict, but they say their results underscore a somber reality that the world will have to confront.

“Being able to, in a specific region, draw this story line together we think is pretty significant,” Richard Seager, a climate scientist at Columbia University’s Lamont-Doherty Earth Observatory and one of the study’s co-authors, tells National Geographic. “The entire world needs to be planning for a drier future in that area. And there will be lots of global implications.”