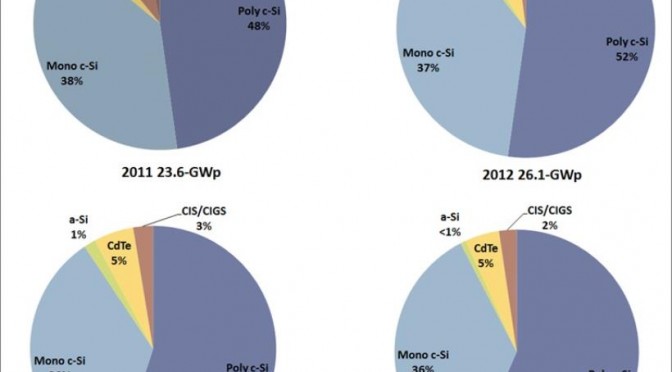 PV industry shipments grew by 15% in 2014 over 2013 to 39.3-GWp from 34.0-GWp the previous year, according to the IDTechEx/SPV Market Research annual supply report Photovoltaic Manufacturer Shipments: Capacity, Production, Prices and Revenues to 2019.

Supply side inventory was 1.1-GWp at the end of 2014 and demand side inventory decreased by 400-MWp to 2.4-GWp. Defective modules removed from service were ~1.6-GWp at the end of 2014. Thin film shipments (CdTe, CIGS, a-Si) represented 7% of the global total in 2014, heavily weighted by First Solar’s CdTe technology. Figure 1 offers PV technology shares for 2011, 2012, 2013 and 2014.
During the mid-2000s the European Feed in Tariff incentive model drove strong demand for photovoltaic systems and technologies. This period of strong demand coincided with a shortage of polysilicon processing capability. Constrained capacity of crystalline products and higher prices for available product spurred interest in thin film technologies and investment in these technologies ramped. It was assumed that thin film technologies would eventually be less expensive to manufacture than crystalline technologies, that conversion efficiencies for thin films would improve, and that thin films would take steadily take share from crystalline.

Thin film technologies, in particular, amorphous silicon, once enjoyed a significantly stronger share albeit in a smaller overall market. Amorphous silicon made its commercial market entry in 1982 and from 1982 through 1992 grew at a compound annual rate of 30%. During this same period, the market for all photovoltaic technologies grew by a compound annual rate of 22%. Timing is often everything, and a-Si’s commercial debut coincided with the early success of the consumer indoor application (solar powered calculators, watches and other small typically handheld devices). The use of a-Si with its reasonably good performance in low light conditions and liquid crystal displays displaced the former LED (light-emitting diode) displays on early calculator models. By the late 1980, the consumer indoor market was saturated. It rapidly began decreasing.
In 2009, the shortage of crystalline module product eased, and prices for crystalline modules began decreasing. This led, almost immediately, to a slowing of demand for thin film technologies. During the mid to late 2000s, new entrants had invested in turnkey thin film manufacturing facilities hoping for a more rapid ramp. This rapid ramp to commercial production did not, by in large, happen and with the price of higher conversion efficiency crystalline product decreasing rapidly the competitive position of thin film technologies began to diminish. The exception to the eroding share for thin film technologies is First Solar with its CdTe technology. First Solar currently primarily uses its CdTe panels for its in-house system’s business. Regionally, thin film production is most active in the US, Japan and Malaysia.
China’s Hanergy acquired US CIGS manufacturer MiaSole as well as US flexible CIGS manufacturer Global Solar and the former Q-Cells CIGS business in Europe. There is demand for lighter weight photovoltaic panels and a lack of commercial or near commercial availability of PV technology to fulfill this demand. In particular, China has strong interest in rooftop solar, but unfortunately, inappropriate roof construction for currently available PV product.