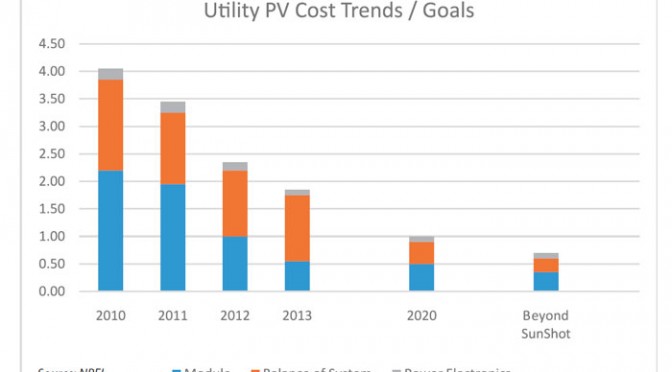 China’s large PV market share is mostly involved with technologies that are well-established.

Many PV module manufacturers have the ability to buy turnkey production lines.

And while China’s PV manufacturers get a lot of respect for what they do, their well-established product dumping policies result in production with not a lot of gross margin, if any at all. China’s research is good and their production capabilities are well accepted, but they’re not at the level of other, mostly “western” industrial PV manufacturers.

Researchers working with photovoltaic (PV) technologies and production processes have made great strides over the past several years, such that PV systems are now considered a viable and cost-competitive energy alternative to traditional fossil fuel energy sources. The number of installations continues to increase, while panel and system costs continue to decline. By the end of 2013, the amount of solar power installed in the U.S. had increased to 13 GW, an 11-fold increase over the previous five years (2008). And from 2010 to 2013, the installed cost of unsubsidized utility-scale PV systems dropped from $4/W to less than $2/W, according to data from the U.S. Dept. of Energy (DOE). Solar efficiencies for all solar cells, including the bulk of silicon-based solar panel commercial installations, also continues to improve.

As a result of these trends, the cost of electrical energy derived from PV cells/panels in the U.S. is expected to equal the cost of electrical energy produced by natural gas-driven turbines by 2025, according to a report by Lux Research. But, improvements in PV performance and production output are increasing at a much faster rate than initially estimated, and the equality point is likely to happen even sooner than the Lux report, says Greg Wilson, Director of the National Center for Photovoltaics at the National Renewable Energy Laboratory (NREL), Golden, Colo.

Indeed, in early 2011, the DOE’s Solar Energy Technologies Office created its SunShot Initiative aimed at making solar energy cost-competitive with traditional energy sources by 2020. Only three years into their 10-year timeframe, about 60% of the SunShot Initiative’s original 2020 goals have already been met. SunShot aimed to reduce the total installed cost of solar energy systems to $0.06/kWh (kilowatt-hour) by 2020. Obviously, 2020 isn’t an endpoint, with continuing efforts expecting PV to meet about 14% of the U.S.’s total electricity needs by 2030 and more than a quarter by 2050. Meeting these goals would reduce the overall energy costs (saving $20 billion annually by 2050) and reducing the nation’s overall carbon emissions.

Over the past decade, the global PV market has expanded from less than 1 GW in 2000 to more than 38 GW in 2013. The total cumulative installed base of PV capacity is now well over 150 GW. The source of commercial PV panels has changed as well, with the U.S. becoming a net importer of commercial solar panels. Slightly more than a third of those solar panel imports came from China in 2007. By 2011, that import level increased with nearly two-thirds of all imported solar panels to the U.S. coming from China.

But, while silicon-based solar cells make up the bulk of the commercial PV cells seen on the roofs of commercial buildings, “there are a lot of different elements being researched,” says NREL’s Wilson. “Organic/inorganic hybrids are one of those versions having the greatest growth potential.”

Short-term technologies
Wilson doesn’t expect significant changes in silicon-based solar technologies or production processes over the next five years, other than gradually improving cost effectiveness and evolutionary performance improvements. One of the continuing issues in silicon solar cells involves the dicing processes for the wafers to assemble the cells into modules. Little has changed in this area for a long time; and with the expanding production volume increases seen in these devices, there are big cost-saving incentives for improving these processes.

In the short-term, there is a high likelihood that CdTe (cadmium telluride) PV systems will see commercial success and growth. CdTe is the only thin-film PV technology with lower costs than the crystalline silicon systems in multi-kilowatt systems. “CdTe has potential for 21 to 22% solar efficiency, but today’s CdTe panels are about 15% efficient, which is slightly lower than multi-crystalline silicon panels,” says Wilson. “These systems have substantial potential noting that currently there is one large-scale provider, First Solar. Copper-indium diselenide (CIS or CIGS, for CuInGaSeAs) PV systems also are expected to see expanded use and growth with solar efficiencies also in the 20% range, although recent efficiency improvements in CdTe PV devices have been a bit more dramatic. CIS-based PV modules perform well in low light level conditions (cloudy skies), having a higher spectral response compared to other PV materials.”

“Perovskite solar cells are also a very interesting material,” says Wilson. “It came out of nowhere in three years from 4% solar efficiencies in 2009 to now more than 20%.” Perovskite is the fastest advancing solar technology to date. This device commonly includes a hybrid organic-inorganic lead or tin halide-based material as the light harvesting active layer. Perovskite absorber materials include methylammonium or formamidinium lead halide which are inexpensive to produce and simple to manufacture.

Longer-term technologies
By 2025, researchers and solar cell developers expect to see optimized III-V solar cell devices on the rooftop, according to Wilson. In the past, most solar cell development has been basic and performed mostly by trial-and-error techniques. Now, however, there are sophisticated computational tools and systems available to researchers that allow them to search for specific electrical characteristics, such as band gaps. These software modeling systems are rapidly improving with the ability to identify new polycrystalline thin film solar cell devices. “In 10 years, silicon-based systems will definitely be more efficient and cheaper,” says NREL’s Wilson. But computational tools will allow researchers to add another junction to those improved devices, making the resulting system more efficient.

Global development
Despite the new computational and modeling tools now available, photovoltaics remain a difficult technology to advance, according to Wilson. “With photovoltaics, you become involved in very different material science areas, and research groups need a critical mass to develop new photovoltaic devices and technologies.” PV research is well recognized in the U.S. in government labs, but even more so at industrial research companies and research-based universities.Photovoltaics is indeed a global community, especially from a commercial production standpoint. Specific PV technology leadership areas include the U.S., Germany, Australia, China and Japan. China currently holds the leadership position for production with nearly 60% market share, with Taiwan having about 18%, and Japan, Malaysia, Germany and the U.S. each having less than 10% market shares. Of these six primary PV panel suppliers, the U.S. has the smallest market share (2%).

These market share values represent the actual volume of solar panels produced. The total value of an installed PV system includes more. It includes the system installation, site preparation and permitting, electronic converters and other electrical connections. Currently about a third of the total cost of an installed PV system is the actual PV modules. Fully two-thirds of the cost is associated with those other components, with about 40% associated with soft costs. Also, most installed PV system costs don’t include storage systems, which can be substantial. If excess PV power is fed back into the electric grid and no storage system is employed, the value of the PV system has to be discounted by the amount of grid-based electric power purchased during non-sun periods. Grid feedback during the day would then also be factored into the overall cost as grid-based revenue.

There have also been substantial discussions surrounding the value and overall quality of imported PV modules. Despite the U.S.’s insubstantial 2% PV module market share, the U.S. Dept. of Commerce (DOC) levied an average 52% anti-dumping tariff on certain crystalline silicon PV products last fall. This action addressed previous anti-dumping tariff situations against Chinese producers that were sidestepped by moving production to Taiwan. But in additional actions, the DOC found the dumping charges were minimal and cut the tariffs on most Chinese PV panels to about 15%.