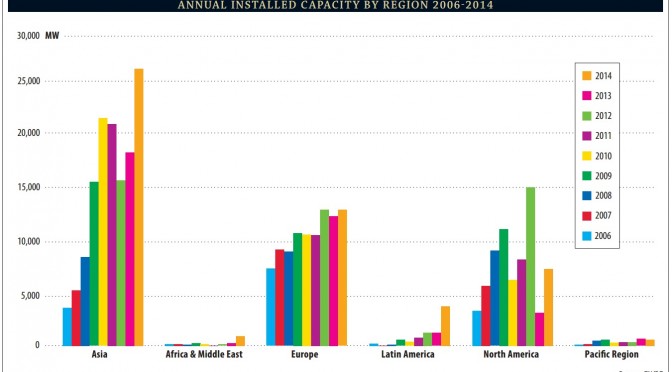 According to the Global Wind Energy Council (GWEC), 51,4777 GW of new wind energy capacity was installed in 2014, pushing the cumulative total worldwide up to 369,553 GW by the end of the year.

“Wind power is the most competitive way of adding new power generation capacity to the grid in a rapidly increasing number of markets around the world, even when competing against heavily subsidized incumbents,” said Steve Sawyer, GWEC Secretary General.

“Wind is a rapidly maturing technology, with proven reliability and competitiveness. Not only the low prices but also the cost-stability of wind power makes it a very attractive option for utilities, independent power producers and companies who are looking for a hedge against the wildly fluctuating prices of fossil fuels.”

In a completely unsurprising turn of events, China continues to lead the way, setting a new record in 2014 of over 23 GW of new wind power capacity installed, which makes up for 45% of the global market. In fact, China makes up an incredible amount of the Asian market, which only sits at 26,161 MW, with India in second place, having installed a distant 2.3 GW.

As seen in the numbers put out by the European Wind Energy Agency, the European wind energy industry grew marginally with a 3.8% year on year growth over 2013, installing 12.8 GW of new capacity — bulked by Germany’s 5,279 MW and the UK’s 1,736 MW.

American installation additions amounted to a respectable 934 MW, while Brazil led the way in Latin America, installing 2,472 MW of the region’s total 3,749 MW.

Up north, America recovered somewhat, installing 4,854 MW, while Canada set a new record with 1,871 MW and Mexico a healthy 522 MW.

And, as the GWEC put it, “Australia’s 567 MW showed that the renewables industry in Australia is not dead, despite the best efforts of the government to kill it.”

“The wind power industry is a key solution to climate change, air pollution, energy security, price stability and a driver of new industries and employment,” said Sawyer. “Let’s hope the climate negotiators get that message and come up with something useful in Paris in December.”