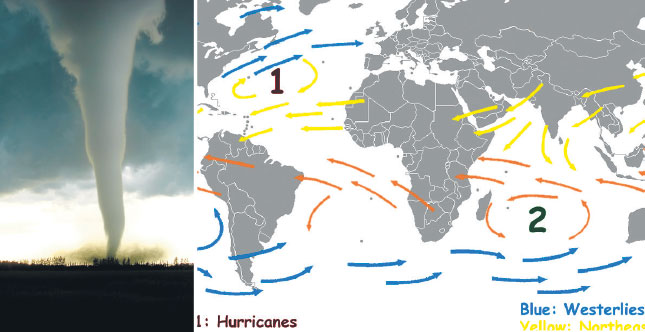 Wind is somewhat of a mystery. We can’t see it, but can feel it. So what exactly is wind?

Wind is the movement of large amounts of air. Even though we can’t see air, we know that it is made up of molecules of different kinds of gasses, mostly nitrogen and oxygen. When lots of these molecules move, usually in one direction, we call this wind.

Where does wind come from?

Wind is caused by differences of pressure in the Earth’s atmosphere. Air from a high pressure area will move towards an area of low pressure. High winds are caused when air moves between areas with large differences in air pressure.

Another factor that affects the wind is the spinning of the Earth. This is called the Coriolis’ effect.

•    Wind speed – The speed of wind is measured in miles per hour or kilometers per hour. Scientists typically use a tool called an anemometer to measure the speed of the wind.

The Earth has consistent wind patterns when looked at from a global scale. Global winds are created by both the spin of the Earth (Coriolis’ effect) and the differences in temperature between the equator and the polar areas. These winds are often grouped together as trade winds, easterlies, and westerlies.

•    Prevailing westerlies – In the middle latitudes of the Earth, between 35 and 65 degrees latitude, are the prevailing westerly winds. These winds blow from the west to the east and also towards the poles.

•    Polar easterlies – These winds blow close to the north and south poles. They blow away from the poles and curve east to west.

Some winds are generated by changes in air pressure and temperatures locally. These winds may change direction as conditions change throughout the day.

Land formations such as mountains, valleys, lakes, and deserts can also effect the local wind conditions.

Wind is a great source of renewable energy. Wind turbines and wind farms can generate electricity without burning fossil fuels or producing pollution.

•    The fastest winds on the Earth occur inside tornadoes where wind speeds can reach 250 miles per hour.

•    The wind has helped to shape the land through the process of erosion.

•    Other planets with atmospheres have winds. Neptune has the highest speed sustained winds in the solar systems with wind speeds of 1,300 miles per hour.

•    The solar wind is a stream of charged particles that flows from the sun.