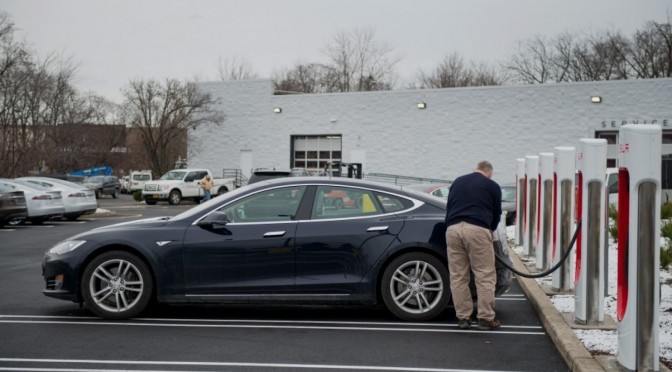 The suburbs have had it rough in the last few years.

The 2008-2009 economic collapse led to waves of foreclosures in suburbia, as home prices plummeted.

More recently, census data suggest that Americans are actually shifting back closer to city centers, often giving up on the dream of a big home in suburbs (much less the far-flung “exurbs”).

It doesn’t help that suburbia has long been the poster child for unsustainable living. You have to drive farther to work, so you use a lot of gas. Meanwhile, while having a bigger home may be a plus, that home is also costlier to heat and cool. It all adds up — not just in electricity bills, but in overall greenhouse gas emissions. That’s why suburbanites, in general, tend to have bigger carbon footprints than city dwellers.

You can see as much in this amazing map from researchers at the University of California, Berkeley, showing how carbon footprints go up sharply along the east coast as you move away from city centers: But now, a new National Bureau of Economic Research working paper by Magali A. Delmas and two colleagues from the UCLA Institute of the Environment suggests that recent technologies may help to eradicate this suburban energy use problem. The paper contemplates the possibility that suburbanites — including politically conservative ones — may increasingly become “accidental environmentalists,” simply because of the growing consumer appeal of two green products that are even greener together: electric vehicles and solar panels.

“There’s kind of hope for the suburbs, basically,” says Delmas — even though suburbia “has always been described as the worst model for footprint per capita, but also the attitude towards the environment.”

Here’s why that could someday change. Installing solar panels on the roof of your suburban home means that you’re generating your own electricity — and paying a lot less (or maybe nothing at all) to a utility company as a result. At the same time, if you are able to someday generate enough energy from solar and that energy is also used to power your electric car, well then you might also be able to knock out your gasoline bill. The car would, in effect, run “on sunshine,” as GreenTechMedia puts it.

A trend of bundling together solar and “EVs,” as they’re called, is already apparent in California. And if it continues, notes the paper, then the “suburban carbon curve would bend such that the differential in carbon production between city center residents and suburban residents would shrink.”

The reason is that, especially as technologies continue to improve, the solar-EV combo may just be too good for suburbanites to pass up — no matter their political ideology. Strikingly, the new paper estimates that for a household that buys an electric vehicle and also owns a solar panel system generating enough power for both the home and the electric car, the monthly cost might be just $89 per month — compared with $255 per month for a household driving a regular car without any solar panels.

This dramatic savings becomes possible to contemplate, notes the study, due to the growing prevalence of $0 down payment options both for installing solar panels, and for buying electric vehicles.

A home with solar panels on its roof is shown in a residential neighborhood in San Marcos, California in this September 19,2013 photo. REUTERS/Mike Blake

So are we really on the verge of a widespread phenomenon of green “bundling” — suburbanites installing rooftop solar, and then using it to power both their homes and also their cars? The paper points to four separate trends that are, at least, suggestive:

1. Electric vehicle owners and rooftop solar owners clearly overlap. Drawing on data from California — home to half of the U.S.’s purchases of Teslas, the highly regarded (if pricey) all electric luxury vehicle — the researchers show that these electric vehicle buyers tend to be wealthy and highly educated. Their reasons for purchasing, they say in surveys, are not solely environmental — they also include desires for vehicle performance and to own an exciting new technology.

But Tesla buyers overlap with one very important group — rooftop solar power installers. Examining data from California’s Clean Vehicle Rebate Project, the study found that 45 percent of rebate applicants who had an all-electric vehicle (like a Tesla) claimed that they either already had solar panels installed, or that they planned to install them. By contrast, only 36 percent of plug-in hybrid buyers said the same — which may be significant since plug-in hybrids can also run on gasoline.

And suburban solar power users, in California, aren’t your traditional greens. “They’re making this choice for a bunch of reasons,” says Delmas, “but not because they are liberals and think it’s good for the planet.”

2. Tesla’s stock price and several solar company stock prices are positively correlated. The paper goes on to assert that investors may sense this nascent relationship between solar and electric vehicles — showing as much by analyzing the stock price performance of Tesla in comparison with two solar stocks: First Solar, and SolarCity. The latter, they researchers note, is also chaired by Tesla’s Elon Musk, which might account for some of the relationship.

But nonetheless, the stock performance correlation also held for First Solar. For every percentage point increase in the value of First Solar’s stock, the study found, Tesla’s price increased by .1 percent. In other words, the market might be signaling that it sees a connection between the sectors, and expects both to profit — or even that, in Delmas’s words, these companies are in some sense “addressing the same market.”

3. Electric vehicles and solar panels keep getting better — and cheaper. Teslas have improved in range from the original 2008 Tesla Roadster, which could drive 245 miles without recharging, to the Tesla Model S, which can travel 265 miles. And the researchers show that for other plug-in hybrid or battery electric vehicles — the Chevy Volt, Toyota Prius plug-in, Ford Focus Electric, and Nissan Leaf — the trend is similar.

For each of these cars from 2011/2012 through 2014, the paper shows, vehicle price declined even as for several models (Volt, Leaf) the miles per gallon equivalent actually increased — and for the other two (Ford Focus Electric, Prius) it held constant. “These suggestive results highlight the fact that the cost of ownership of electric vehicles in the United States is falling,” note the authors.

For solar power, meanwhile, the numbers are way more dramatic. The authors cite a stunning figure from Clean Technica: From 1977 to today, the average cost of a solar panel declined from $ 76.67 per watt to $ 0.613 per watt!

4. Financing options for Teslas and solar keep getting better. Perhaps most important to consumers, it is now increasingly possible to acquire both electric vehicles and solar panels through advantageous financing plans. In particular, SolarCity allows you to pay for your solar installation from the money that the solar installation itself creates by generating energy. That means that households don’t have to make any down payment, and don’t have to pay for the system’s maintenance. They can just let the sun itself pay it off.

Therefore, writes Delmas’s co-author and UCLA economist Matthew Kahn, the “synergistic possibilities” for those owning these two technologies are growing. And the people buying both solar and EVs, he adds, will be doing so “due to cost minimization and product quality rather than because they want to please Al Gore.”

Maybe there’s a future, then, in which suburbanites someday might actually have an energy cost advantage over city dwellers — at least if they own the right technologies. If so, suburbanites wouldn’t have to feel nearly so bad about their carbon footprints — though not even cars powered by the sun will save them from suffering through that daily commute.