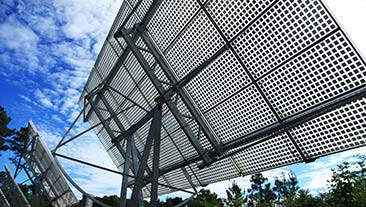 Researchers in Australia recently developed a solar energy system that can convert more than 40 percent of the sunlight that hits it into electricity — the highest efficiency ever reported for a commercially available photovoltaic system.

The technology first achieved the record-breaking efficiency in outdoor tests in Sydney, Australia, and later at an outdoor test facility operated by the National Renewable Energy Laboratory (NREL) in Golden, Colorado, the primary lab for renewable energy and energy efficiency research in the United States.

Martin Green, a professor at the University of New South Wales (UNSW) and director of the Australian Centre for Advanced Photovoltaics, led the research group that built the new energy system. This wasn’t the first time Green and his team broke a world record for solar energy efficiency. [Top 10 Craziest Environmental Ideas]

In May 2011, the UNSW team built a crystalline silicon solar cell with an efficiency of 19.3 percent, beating the previous efficiency record, set by silicon cells, of 18.9 percent. A month later, the researchers built a slightly better cell, which had an efficiency of 19.4 percent. More than two decades earlier, in 1989, Green and his colleagues created an entire photovoltaic system that could convert sunlight to electricity at an efficiency of more than 20 percent.

To double their previous efficiency record for photovoltaic systems, the UNSW team’s recent efforts used commercially available solar cells, combining them with optical filters that trap wavelengths of light the average solar cell can’t capture, according to a statement. This method, known generally as concentrator photovoltaics (CPV), is an emerging technology in the solar sector, one that is usually associated with high production costs and advanced applications, such as space exploration.

But Green and his colleagues built their super-efficient system with commercially available materials, rather than with special, laboratory-produced photovoltaic cells. This helped keep the cost of the system down.

Lab-produced solar cells have even higher efficiencies than the 40 percent achieved by Green and his team. Earlier this month, the German-based Fraunhofer Institute for Solar Energy Systems ISE announced that it had developed a solar cell that can convert 46 percent of the sunlight that hits it into electricity.

While the UNSW solar energy system is not quite that efficient, it will likely be cheaper to produce than the Fraunhofer system. This clean energy alternative can be used in conjunction with so-called power towers — tall structures covered in solar panels. Similar towers already exist at a Commonwealth Scientific and Industrial Research Organization (CSIRO) site in Newcastle, Australia. The CSIRO towers use mirrors to focus sunlight at two towers covered in solar panels. The panels convert light energy to heat, which in turn creates steam. This steam then powers a turbine, which generates electrical energy.

The UNSW researchers presented a paper on their 40-percent efficiency achievement at an Australian Photovoltaic Institute conference at UNSW on Dec. 8. The paper will be published in an upcoming edition of the journal Progress in Photovoltaics.