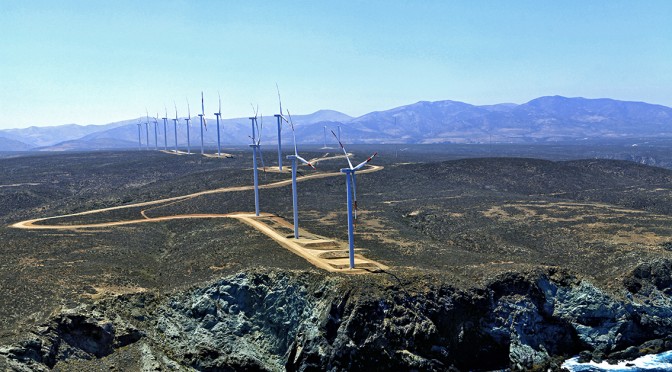 ACCIONA Energía Chile will supply 600 gigawatts a year over 15 years to Chilean electric power distributors that operate in the Central Interconnected System (SIC) after being awarded this level of supply in the latest tender called by the country’s National Energy Commission (CNE).

The electricity will be generated in non-conventional renewable energy installations – wind power and photovoltaic – that ACCIONA will build over the next few years. Their total capacity will be 255 MW, with a total investment of around 500 million US dollars (400 million euros at current exchange rates).

ACCIONA will sign energy supply contracts for the 2018-2032 period with the pool of distributors that were behind the tender; they all operate in the Central Interconnected System (SIC).

The total of 600 GWh awarded to the company is equivalent to the electricity consumption of around 300,000 Chilean homes or the energy content of 354,000 barrels of oil. It will also avoid the emission of 576,000 metric tons of CO2 to the atmosphere a year (from coal-fired power stations).

The company is presently carrying out a number of wind power and photovoltaic projects that will enable it to cover the allocated electric power supply.

The bid was made in competition with conventional technologies, and it highlighted the competitiveness of renewable energies against fossil-based equivalents in the Chilean market.

ACCIONA Energía CEO Rafael Mateo expressed his satisfaction at the result of the bid, in which the company was awarded all the energy it had offered: “It is a very positive outcome that will strengthen our position in Chile and allow us to make a significant contribution to the country’s objective of achieving a more sustainable energy matrix”.

Last October ACCIONA started up the Punta Palmeras wind farm in the Coquimbo region. It is equipped with fifteen 3-megawatt ACCIONA Windpower turbines, the most powerful in the country at the time they entered service.

The company is also working on other wind and photovoltaic projects in Chile, either as owner or for other customers. It is presently building a photovoltaic plant in the Arica y Parinacota region for E-CL (Groupe GDF Suez).

Apart from energy, the ACCIONA Group has been present in Chile for 20 years and has developed major infrastructure and water management projects. It currently operates the concession of Route 160 in southern Chile, is building the first desalination plant for the mining industry in the Valley of Copiapo (Atacama desert) and has constructed four wastewater treatment plants in the country.

On a global level, ACCIONA Energía now owns and operates 8,500 MW in fifteen countries on the five continents. Its total production in 2013 exceeded 22 TWh.