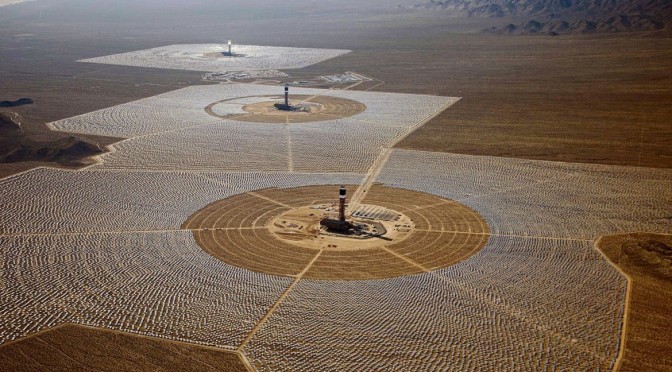 As of the end of Q3, 2014, the U.S. was home to 578,000 individual solar installations on rooftops, parking lots, landfills, deserts and fields. This represents a cumulative 16.1 gigawatts (GWdc) of photovoltaic (PV) generating capacity and 1.4 GWac of concentrated solar power (CSP) capacity, up from 1.2 GWdc of PV and 0.4 GWac of CSP five years ago.

The numbers come from the latest edition of GTM Research and the Solar Energy Industries Association’s (SEIA) U.S. Solar Market Insight report, released today. According to the report, Q3 was the nation’s second-largest quarter ever in terms of PV installations, bringing the country’s cumulative solar PV capacity to 16.1 gigawatts, with another 1.4 gigawatts of concentrating solar power (CSP) capacity.

Solar is proving to be an important and growing source of new generating capacity for the United States. Through the first three quarters of the year, solar represents 36 percent of the new capacity that came on-line, up from 29 percent in 2013 and 9.6 percent in 2012.

“Solar’s continued impressive growth is due, in large part, to smart and effective public policies, such as the solar Investment Tax Credit, net energy metering and renewable portfolio standards,” said Rhone Resch, SEIA president and CEO. “By any measure, these policies are paying huge dividends for America. Every three minutes of every single day, the U.S. solar industry is flipping the switch on another completed solar project, benefiting both our economy and the environment.”

The U.S. residential market exceeded 300 megawatts in a quarter for the first time in history. Impressively, more than half of this total came on-line without any state incentive. Residential continues to be the most reliable market segment, now growing for eighteen out of the past nineteen quarters. GTM Research forecasts it to exceed the non-residential segment in annual installations for the first time in more than a decade. 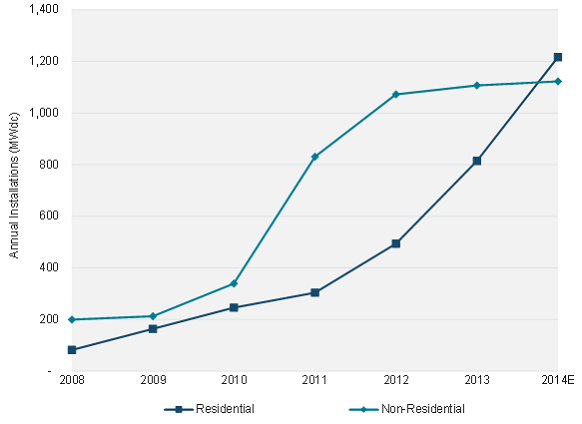 “Residential solar has become a remarkably consistent, growing market” said Shayle Kann, senior vice president at GTM Research. “By the end of this year, there will be more than 600,000 homes outfitted with solar, and we see no signs of a slowdown next year. By 2017, we expect the residential sector to be the largest in the U.S. solar market.”

Key findings from the report: