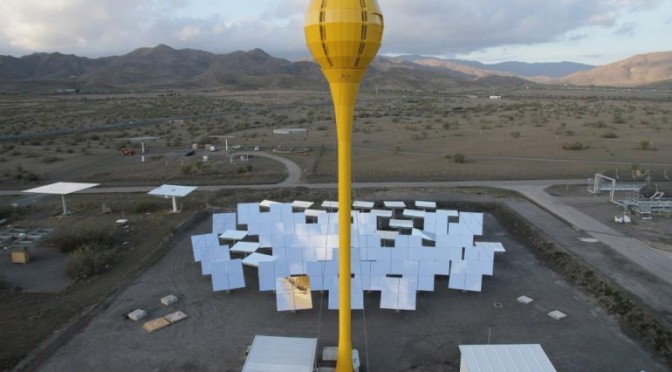 Powered primarily by the sun, AORA’s Tulip Concentrated Solar Power (CSP) works 24/7 – even at night and when it’s cloudy.

Powered primarily by the sun, AORA’s Tulip Concentrated Solar Power (CSP) works 24/7 – even at night and when it’s cloudy.

Solar energy is an ideal solution for the power needs of the developing world – except for one problem: It stops working when the sun goes down, at precisely the time power is needed to turn the lights on. The solution, according to Zev Rosenzweig, CEO of Israeli energy technology company AORA, is a hybrid system – one that utilizes solar to the fullest, and supplements it with a “backup” system to keep the power flowing when the sun is not high in the sky, using scant resources, with an operating cost of next to nothing.

It’s perfect for developing countries, said Rosenzweig – and after six years of research and pilot projects, and an investment of $40 million, AORA is ready for prime time, he said.
The company announced Tuesday that it had signed a deal to build one of its Tulip solar-hybrid power plants in Ethiopia. “We are transforming our Green Economy Strategy into action and are pleased to partner with AORA to help achieve our vision,” said Alemayehu Tegenu, Minister of Water, Irrigation and Energy for Ethiopia. “AORA’s unique solar-hybrid technology is impressive and well-suited to provide both energy and heat to support local economic development in off-grid rural locations in Ethiopia.”

“Off-grid rural locations” are exactly the places Rosenzweig wants to see more Tulips installed. “Our hybrid system uses both solar power and biogas to operate a turbine, with the hot air moving the turbine to generate electricity.”

Enhancing the sunlight are a series of mirrors to heat compressed air to over 1800 degrees Fahrenheit and drive a turbine. When the sun goes down, the system moves seamlessly from solar to biogas in order to power the turbines, with the biogas derived from animal waste, biodiesel, natural gas – just about any material that can be burned for fuel.

For villages in places like Ethiopia, the best part of the system, said Rosenzweig, is that it doesn’t even need water to operate. In essence, Tulips are like perpetual energy machines; when the sun is out, solar power is converted into power to run the turbines and create electricity; and when the sun is in, the system turns to biogas, created by an AORA conversion system.

There are Tulips in Israel, Spain, and the US, but those are test programs; Ethiopia will be the first country to deploy the system commercially. Construction of the first plant is expected to begin by mid-2015. Following a trial, the Ethiopian ministry intends to expand deployment of AORA installations for rural economic development to off-grid communities in selected areas of the country.

Each Tulip station is small and modular, producing 100kW of electricity in addition to 170kW of heat, while occupying less than 3,500 square meters (0.86 acres), requiring much less land per kWh to generate usable power and heat than other systems, like photovoltaic, said Rosenzweig. “Each Tulip can generate enough electricity for 30-40 homes in Western countries, and should be enough to cover all the power needs of villages in the developing world,” with each system costing between $500,000 and $750,000, depending on size.

The Tulip technology was developed at the Weizmann Institute, and AORA has the worldwide rights to commercialize and distribute it, with Rosenzweig one of the leaders of the research. “I got the idea for this in India, where they lose a lot of their harvest because they have no place to store fruits and vegetables in rural areas,” he said.

Existing solar systems in rural areas could only operate part of the time – not at night, and not during the rainy season – so they weren’t usable for refrigeration, without which produce would start to rot within a few days, long before most of it could get to market. “Electricity can change the lives of people in the developing world, and the Tulip system can provide an effective solution to any community anywhere,” said Rosenzweig.

“We are pleased to partner with the ministry and look forward to bringing our technology to Ethiopia to provide the population with affordable access to power,” added Rosenzweig. “Such access will have significant social and economic impact on off-grid communities, helping to provide power to schools and medical facilities, refrigeration for food processing and post-harvest storage, groundwater pumping and much more.”