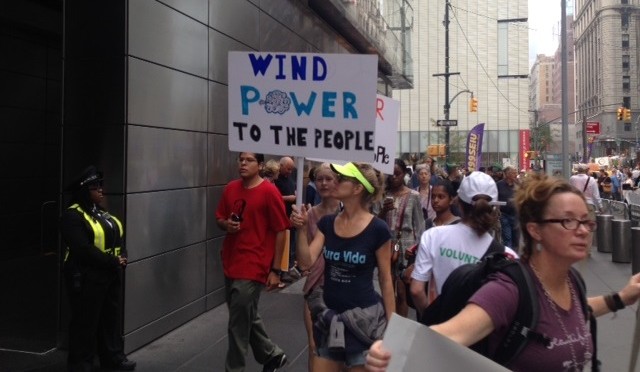 Of the 1,000-plus Americans surveyed, 83 percent believe that climate change is occurring. 63 percent are concerned about changes in the frequency and intensity of natural disasters, such as floods, hurricanes, and tornadoes.

From a regional perspective, Americans living in the Northeast are more concerned (71 percent) about changes in the severity of weather events than those living in the West (65 percent), Midwest (60 percent), and South (59 percent).

“Our survey findings indicate that national sentiment over whether or not climatic changes are occurring has finally reached a tipping point,” said Tony Kuczinski, President and CEO of Munich Re America.

“Nowhere in the world are the insurance industry and its customers more affected by the rising number of natural catastrophes than in North America,” Kuczinski continued. “Driving adaptation and mitigation efforts will require a persistent public-private effort that spans the insurance industry, government agencies, and the American public. A critical step in this process is to continually bring relevant information to the forefront and to promote an open and robust discussion about solutions.”

Despite increased awareness of climatic issues and the long-term risks of change associated with them, the study found that Americans are least concerned about climate change (14 percent), when compared to global political instability (31 percent), an economic crisis (27 percent), or a pandemic (22 percent).

Mitigating the Risks of Climate Change

To most effectively slow down climate change, 71 percent of Americans believe that a greater emphasis should be placed on the use of alternative energy sources, such as solar or wind power. Further, 66 percent support government-backed tax incentives to drive business or consumer behaviour and 61 percent feel education initiatives about ways households can reduce their carbon footprint would be most effective.

Additionally, the Munich Re America 2014 Climate Change Barometer indicates that 63 percent of Americans plan to fortify or have already fortified their homes in order to protect themselves from future severe weather events. Forty-seven percent would consider moving away from hazard-prone areas, and a similar portion of Americans (47 percent) have purchased or plan to purchase an additional insurance policy, such as flood or earthquake insurance.

According to Dr. Peter Hoeppe, Head of Munich Re’s Geo Risks Research Department, “The recent findings of the Intergovernmental Panel on Climate Change (IPCC) are clear: If no action is taken, global warming will mean changing, in most regions increasing, risks in the future for populations, for companies, and for countries.”

“Munich Re’s loss figures reflect the combined changes of socioeconomic and weather driven effects observed over the last decades: economic and insured losses from weather-related natural catastrophes have increased significantly in some regions and for some perils even when adjusted for the increasing level of exposed values. It has to be expected that human-made climate change will aggravate this trend in the future,” Hoeppe continued. “It is, therefore, an economic imperative to act now to slow climate change and adapt to the already unavoidable changes, because in all likelihood these investments will pay back many times over in the future through reduced losses and adaptation costs.”

The results of the Munich Re America 2014 Climate Change Barometer are based on a national probability sample of 1,008 telephone interviews conducted among adults 18 years of age or older (502 males and 506 females) living in private households in the continental United States. The survey was conducted October 9-12, 2014, by CARAVAN®, an omnibus service of ORC International for Munich Re America.

Insurance-related risk management focuses on how atmospheric changes affect losses caused by severe weather events, regardless of cause. Therefore, unlike some other recent surveys conducted on climate change, this survey did not ask specifically about human-made (anthropogenic) global warming, but about significant change in the measures of climate.