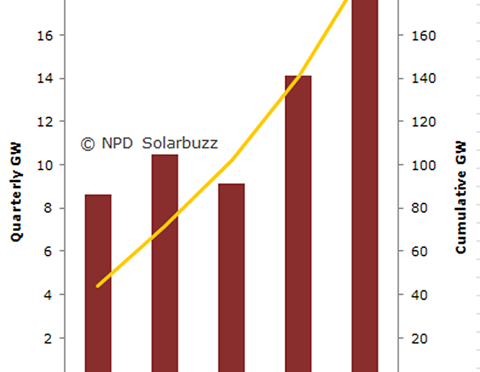 The global cumulative installed capacity of solar photovoltaic (PV) modules will more than treble from 135.66 Gigawatts (GW) in 2013 to 413.98 GW by 2020, according to research and consulting firm GlobalData.

The company’s latest report* states that emerging economies in Asia-Pacific, South and Central America and the Middle East and Africa are expected to be the major markets in the future, due to an increasing focus on renewable energy proliferation to fuel economic growth.

Swati Singh, GlobalData’s Analyst covering Power, explains: “Asia-Pacific is home to many developing countries, including India and China, where substantial installations are being made. The region is also a leading area for solar energy systems production, with Japan, China and Taiwan being three of the largest solar PV cell manufacturers in the world.

Last year marked a turning point in the solar PV space, as China, India and Japan accounted for the majority of global annual installations. China’s growth was especially remarkable, contributing around 12 GW of the world’s 37-GW additions in 2013.

Singh explains: “Prior to 2013, most solar PV installations were in Europe, with Italy, Germany, Spain and France accounting for the majority of global annual installations in 2012.

“Reduced solar PV module prices, combined with European countries’ Feed-in Tariff (FiT) subsidies, have supported the widespread growth of small-scale distributed capacity there. However, GlobalData believes that these tariffs are likely to become less generous in subsequent years, with the reduction or removal of incentives having already been proposed and implemented in some of the region’s countries.”