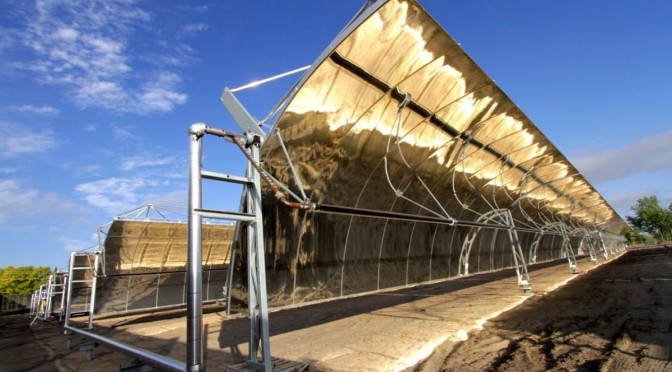 Canada’s 1st Concentrated Solar Power Plant. The one-megawatt concentrated thermal solar plant in Medicine Hat is the first in Canada and the first at this high of a latitude. 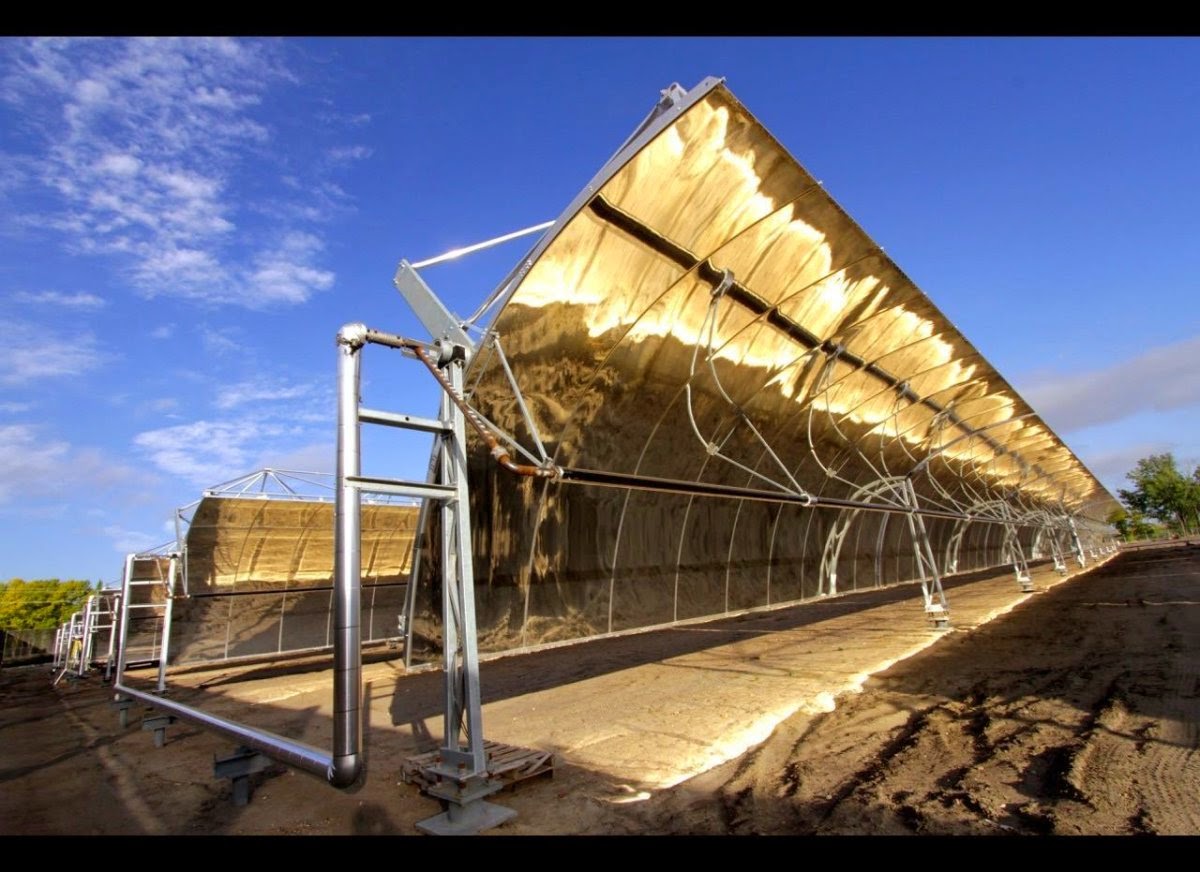 More than three years ago Ted Clugston was showing me around the small southern Alberta city of Medicine Hat for our pilot episode. He pointed to a hillside and said he eventually hoped to see a showcase solar project there. He saw it as an educational opportunity and a chance to show the world that Medicine Hat was investing in clean energy.
At that time Clugston was a town councillor. Now he’s the mayor and that showcase solar project is nearly complete. It’s a one-megawatt concentrating solar thermal plant, the first of its kind in Canada.
It’s a pretty cool sight to see – row, after row of large concave metal mirrors glow in the early morning sun on the hill just above the Trans-Canada Highway and Medicine Hat’s existing natural gas power plant.
Medicine Hat is called the gas city, and for good reason. It sits on sizable natural gas reserves and that meant the city never suffered at budget time. In 2007 the city started down a path that should serve as a model to those lucky places that are endowed with fossil fuels.
“We knew at the time we had to give back in some way. We had to reinvest, we had to diversify because all of our eggs were in that one basket, which was natural gas,” says Clugston.
They started an energy conservation and renewable energy program called “Hat Smart.” And from 2008 to June 2014 they’ve handed out almost $4 million dollars in rebates for things like energy efficient refrigerators, air conditioners and energy audits. It’s also helped build over 100 different small-scale solar power projects.
But this one-megawatt concentrated solar thermal plant this was something else entirely. And while it won’t have its official ribbon cutting until June 21st of 2015, by the time you read this they should be generating power at the plant on a test basis.
“The difference between thermal and photovoltaic is sometimes hard for people to grasp and the best way I get people to understand this project is I say “When you were a kid and you had a magnifying glass, and you focused it and you burnt ants. Well, that’s what this is,” says Clugston.
By focusing the suns rays onto a consistent point you can generate incredible amounts of heat. That heat is used to turn water into steam, which spins a turbine and generates electricity. This project generates temperatures of 340 degrees Celsius.
And while this is the farthest north that a concentrated solar thermal project has ever been built solar makes sense in Medicine Hat. As Clugston reminds us, Medicine Hat is the sunniest city in Canada and they get more direct annual sunlight than Miami, Florida.
This is also one of a handful of concentrating solar thermal plants that is connected to an existing thermal plant. It works in concert with a neighboring 204-megawatt natural gas fired power plant the city utility runs.
But while concentrated solar thermal was first out of the gate, solar photovoltaic modules, the familiar solar panels you know and love, have surpassed concentrated solar thermal.  There are four gigawatts of installed concentrated solar thermal projects in the world but there are more than 38 gigawatts of installed solar PV.
The Medicine Hat project cost $9 million dollars with the funding split evenly between the city, the province of Alberta and the Alberta Climate Change Emissions Management Corporation (CCEMC), a carbon technology mitigation fund that Alberta runs (see our story on CCEMC).
This project has paid an early adopter and innovation premium, at nine dollars an installed watt these projects can’t compete with solar PV. The latest numbers have solar PV coming in at three to four dollars an installed watt. Clugston admits that if this project came before council today they’d probably just spend the nine million on solar PV.
Still, what Medicine Hat has done is leading edge and they’re expecting people to come from far away to see the project: “I’m hoping that every school-aged child in Southern Alberta will at one point in his or her school career, will have to get on a bus and come take a look at this, because it’s that unique in the province, and in the country.”
And while the concentrating solar thermal plant may be sexy and innovative early in September of 2014 Medicine Hat fired up megawatts of wind power to very little fanfare. The Box Springs Wind farm consists of three two-megawatt wind turbines within the city limits.
“We encouraged our residents to put solar panels on their own roof and went 50-50 with them. We also have the first private-public partnership wind farm inside the city limits in all of Canada… And you know what, you can debate it all day long. It’s the right thing to do.”
http://www.helioscsp.com/noticia.php?id_not=2788
termosolar, Concentrated Solar Power, Concentrating Solar Power, CSP, Concentrated Solar Thermal Power, solar power, solar energy, Canada,