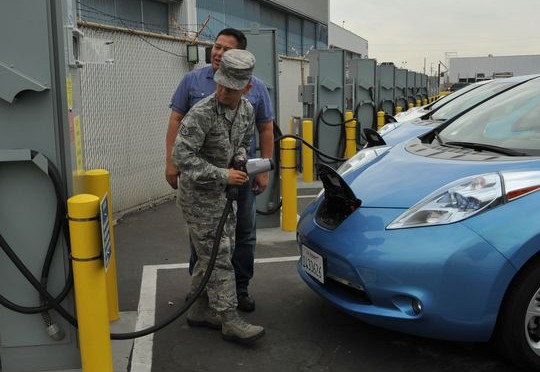 Los Angeles Air Force Base unveiled its 42-vehicle fleet, made up solely of plug-in vehicles.

The fleet includes both electric and hybrid vehicles, including sedans, trucks and a 12-passenger van.

All can get power from and give it back to the electrical grid when not being driven.

“Everything we do to fly, fight and win requires energy, whether it’s aviation fuel for our aircraft or power to run the bases that support them,” Air Force Secretary Deborah Lee James said in a release. “This vehicle-to-grid pilot is a great example of how Airmen are driving the Air Force forward and finding new and innovative ways to make every dollar count.”

The vehicles use “vehicle-to-grid” technology. When parked and plugged in, they can provide more than 700 kilowatts of energy back to the grid annually, providing enough power for more than 140 homes, according to the Air Force.

The service worked with energy providers in California and regulators to test the system.

“We absolutely couldn’t have done this without our federal, state and private partners,” Miranda Ballentine, assistant secretary of the Air Force for installations, environment and energy, said in a release. “The shared investment and commitment by our partners illustrates that innovations such as this have value not only to the Air Force and Department of Defense, but to the nation as a whole.”

After the launch at Los Angeles, the Air Force plans to expand the system to Joint Base Andrews, Maryland, and Joint Base McGuire-Dix-Lakehurst, New Jersey.

The service is also looking at increasing the use of alternative fuels, by expanding on the more than 9,000 ethanol flex vehicles already in the service’s inventory and the more than 50 biodiesel fuel stations on the installations.