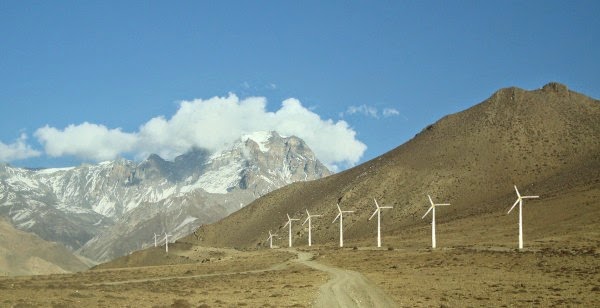 If hydropower is the primary energy source for Nepal and solar energy is one of the best alternative sources of power generation, then wind energy can be another viable option to look out for if we want to address the energy need of our country.

While a few potential areas have been identified, stakeholders from both the government and private sectors have been working to identify and study the prospects of wind power in Nepal.

Nonetheless, the challenges are there to integrate wind as source of alternative energy which need to be overcome to make the country sustainable in terms of energy resources.

The Solar and Wind Energy Resource Assessment (SWERA) project executed by Alternative Energy Promotion Centre (AEPC), has shown a very good prospect for wind energy development in Nepal with prediction of about 3,000 MW of wind power generation in Nepal.

“It is just the capacity that has been identified in 10 per cent of the total potential areas of Nepal,” claims Prakash Aryal, Acting Manager, Wind Energy Sub Component, AEPC.

Meanwhile, wind expert and Electrical Engineer Amrit Singh Thapa feels that Nepal has the capacity to generate “more than 10,000 MW from wind power as the districts of Himalayan range still need to be explored”.

Places above Churiya range in Nepal get 15-17 hours of wind every day, as per Thapa. Mustang, Dhading, Galchhi and Bhorlini are some of those places that provide good place for electricity generation.

Nonetheless, the winter season (from Mangshir to Chaitra) of Nepal is the best time or peak season in terms of wind speeds as the speed is higher and continuous in the country during this time.

However, it doesn’t mean that all places possess the potential. “It is site-specific — certain places have potential while the others do not,” reveals Manoj Kumar Sah, Technical Officer at Nepal Academy of Science and Technology (NAST) and a Mechanical Engineer.

And recently both the private and government sectors seem interested to tap this potential for electricity generation.

Another interesting fact is that it is easier to construct and install wind turbines faster than hydropower. “The hydropower project cycle is big and a single project doesn’t complete even in 10 years at times. But if the road and transmission line is available, we can install a wind turbine of 200 MW in three to nine months,” states Aryal. As such “wind power could be an immediate solution to load shedding”.

However, rather than attempting to develop wind energy alone, it is time to integrate other forms of energy too. Known as “energy mix”, both the solar and wind energies can be integrated to produce energy, as per both Thapa and Aryal.

NAST is another body that has been working to identify the potentials of wind energy in Nepal including feasibility for household levels. And it plans to publish energy atlas for Nepal on completion of the research, as per Sah.

But Thapa thinks it is time for Nepal to go beyond few kilowatts and develop the wind power “in the commercial level as it has that potential”.

And through his company Mirlung Electro-Mech Concern, “we are exploring the potentials of wind in new places which can be developed commercially,” adds Thapa who also provides free consultation to install wind turbines both at domestic and commercial levels.

There is interest from different sectors but the government has not introduced a favourable environment to encourage private sectors to invest in wind power. “Despite huge potential of wind energy at the commercial level, we lack budget,” says Thapa adding, “The government hasn’t yet said that it will buy windpower if developed by private sector. As such though various companies have shown interest, they are afraid to make the initial investment. At least Rs 1,500,000 is required in the beginning for measurement of wind speed in the potential areas before establishing any plant.”

Besides budget, lack of transmission line and roads are other problems. “There is potential of wind energy in the northern belt but we lack access to roads and transmission line. And again, if power is generated, there will be problems of power evacuation — there is problem regarding connecting it to the Nepal Electricity (NEA) grid,” Aryal adds.

However, he is hopeful that wind energy will flourish in the days ahead as the 2070 BS subsidy policy is favourable to promote wind energy as compared to the one of 2066 BS.