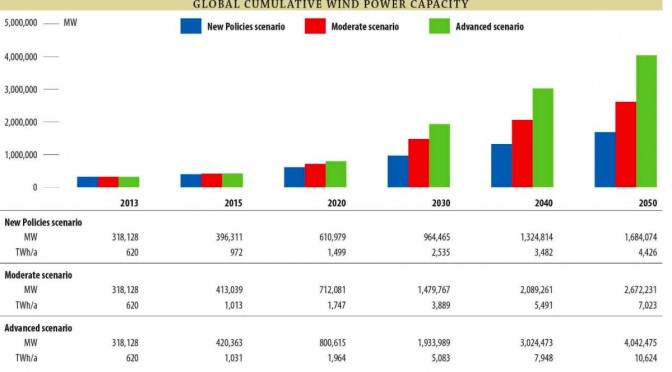 Wind power capacity could increase nearly seven-fold by 2030, reaching a total of more than 2000 gigawatts and meeting almost 20 per cent of electricity demand, according to a new report.

Released last week, the Global Wind Energy Outlook 2014 says that while wind power is already in 90 countries – with a total installed capacity of 318 gigawatts at the end of 2013 – growth has been flat for the last several years at about 40GW per year due to the economic crisis, low growth in wealthy countries, and policy instability.

The report, put out by Greenpeace and the Global Wind Energy Council, a trade organisation, found that going forward this could change and per-year installations could rise to as much as 90GW.

There are a number of encouraging signs. The Chinese wind market posted strong growth last year and has great potential. The US market is recovering and appears back on track for the short term at least. India, in desperate need of more electricity, is starting to look to wind. According to the report, the most exciting areas of new growth are in Brazil, Mexico, and South Africa. Brazil is set to install nearly 4GW in 2014 alone; energy reform in Mexico has set that country on course for a 2-gigawatt-per-year market for the next decade; and South Africa is putting up solid numbers, which could be the beginning for major wind development across the African continent.

“Wind power has become the least-cost option when adding new capacity to the grid in an increasing number of markets, and prices continue to fall,” Steve Sawyer, CEO at GWEC, said in a statement. “Given the urgency to cut down CO2 emissions and continued reliance on imported fossil fuels, wind power’s pivotal role in the world’s future energy supply is assured.”

The report focuses on the power sector, which is the single largest global contributor to greenhouse gas emissions at about one-quarter of all GHGs. In order to improve this sector as quickly as possible, the report recommends a three-pronged approach. Focus on improving energy efficiency and energy saving technologies in the short term; get off a coal fast even if that means switching to natural gas; and ramping-up renewable energy growth. The report states that while solar may be the largest energy source by 2050, in the near future the biggest contribution to power-sector emissions reductions will come from hydro and wind.

This is apparent right now in the US where record low costs and high demand from power purchasers kept the wind industry extremely busy last quarter, according to a new report from the American Wind Energy Association. Third quarter results released this week found that 19 wind projects have been completed in America this year, with as much wind generating capacity as in all of 2013. Looking ahead, some 13.6GW across 105 projects are under construction, which foreshadows a strong finish to this year and beginning of 2015.