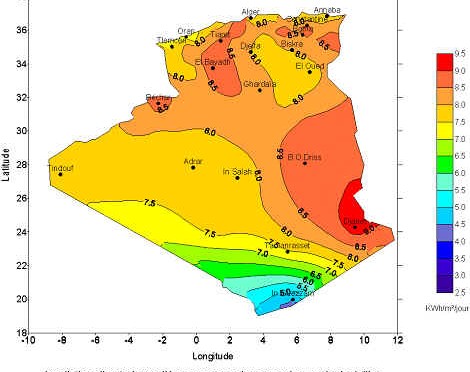 The first station, based in Khenchela, is being constructed, declared Chahar Boulekhras in the opening of the 5th Renewable Energies, Clean Energies and Sustainable Development Exhibition (ERA 2014), in Oran Convention Centre (CCO).

A score of areas are being spotted for the installation of further similar stations, by the Algerian Space Agency (ASAL), as part of the renewable energies development programme, the same official told APS.

“We set up a photovoltaic plant with four different technologies, in an experimental phase in Ghardaïa and a wind farm of 10 megawatts in Kabertenne (Adrar), equipped with 18 wind turbines in operation,” Boulekhras added.

Besides this programme, SKTM works to develop the national technical integration through the encouragement of the national capacities (public and private companies or with foreign partners), to reach a 50% rate within 2020 and an 80% rate in 2030, he added.

Boulekhras also announced the launch of calls to tender to achieve this solar programme which has important potentials like an industrial basis for the development of renewable energies.

“The national solar program is encouraging; it’s one of the world’s best programmes. Algeria has to give chances to the local industrialists and the stimulus they need to start or expand their projects,” said, as for him, Mohamed Saidi, General Manager of the “Algerian PV Company” (ALPV) first Algerian plant to produce solar panels, located in Tlemcen.

More than 100 national and foreign exhibitors, from Germany, China, Cyprus, UAE, France, Italy, Poland, Austria and the Czech Republic are taking part in the 5th “ERA” Exhibition, inaugurated by Wali of Oran, Abdelghani Zaalane in the presence of Secretary General of the General Union of Algerian Workers (UGTA), Abdelmajid Sidi Said and Austrian ambassador in Algeria, Aloisia Wörgetter.