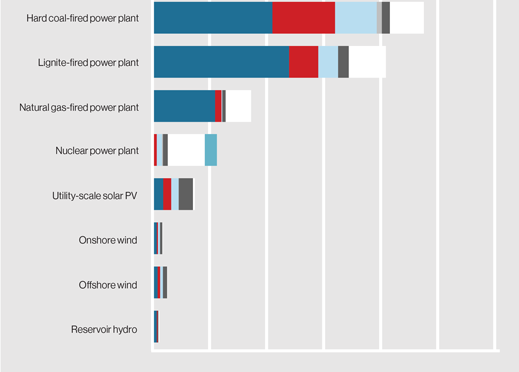 It’s no surprise that if environmental costs are considered, renewables—particularly wind power—are a far better bargain than coal power. But it might surprise many that according to a new such analysis, nuclear power lags far behind wind energy and even hydroelectric power in its economic impact, at least in the European Union.

Energy costs are rarely viewed through this lens, though it is more common in Europe than in the U.S. and other parts of the world.

The study, commissioned by the E.U. and conducted by Ecofys, a renewable energy consultancy, considered the economic costs of climate change, pollution, and resource depletion as well as the current capital and operating costs of the power plants.

The authors assessed the cost of generating electricity and any resulting environmental damage. They used a measure known as the “levelized cost,” the estimated cost per megawatt-hour, without subsidies, of building and operating a given plant in a given region over an assumed lifetime. The authors referred to established models and academic literature to find monetary values for pollution, land use, and resource depletion. And to account for climate change, they assumed a metric ton of emitted carbon dioxide costs around €43 ($55).

Previous studies have looked at the economic impacts of pollution and other environmental consequences of energy production, but the Ecofy analysis is unique in that it includes the depletion of energy resources as an additional cost, says Ann Gardiner, a consultant at Ecofys who co-authored it.

Surprisingly, solar power fared poorly in the analysis, costing far more than wind power and nearly the same as nuclear power. The reason, says Gardiner, is that many of world’s solar panels are manufactured in China, where electricity is very carbon-intensive. The depletion of metal resources also represents a larger cost for solar than wind, she says. Gardiner notes, however, that solar technology is still improving and may be more cost-effective today than it was in 2012, the year used for the study.

The chart below shows the estimated environmental cost for several technologies, per megawatt-hour.

These costs would look different for other parts of the world. Two of the most influential variables are the cost of fuel (natural gas is much cheaper in the U.S., for example) and the capital cost of building power plants, which varies globally by as much as four times, says David Victor, professor of international relations at the University of California, San Diego.