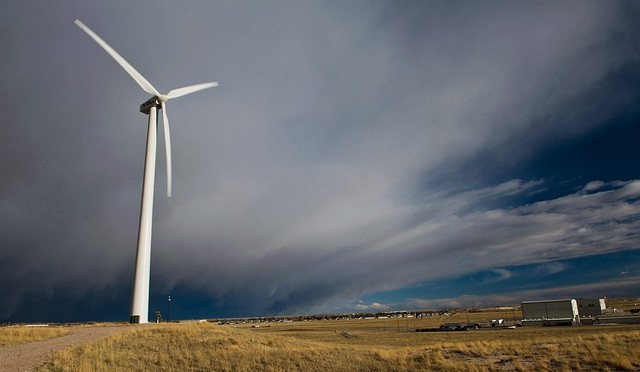 An alliance of four companies proposed an $8 billion wind energy project Tuesday that within a decade could send wind power generated on the plains of Wyoming to households in Southern California.

If approved and financed, the sprawling venture would produce wind power equivalent to the output of a large nuclear power plant by creating one of the country’s largest wind farms near Cheyenne, a huge energy storage site inside Utah caverns and a 525-mile electric transmission line connecting them.

“This would certainly be one of the most ambitious and expensive energy infrastructure projects we have seen,” said Travis Miller, an industry analyst for investment research giant Morningstar Inc. “Energy storage, paired with renewable energy, has been the holy grail of utilities and energy companies.”

Jeff Meyer of Pathfinder Renewable Wind Energy, one of the companies behind the plan, described it as “the 21st century’s Hoover Dam,” referring to the 726-foot high span across the Colorado River that for decades has produced hydroelectric power for Nevada, Arizona, and California.

The announcement came on the same day that President Barack Obama pressed world leaders to follow the United States’ lead on climate change in a one-day United Nations summit aimed to gather support for a climate change treaty to reduce heat-trapping pollution.

The new proposal, with a tentative completion date of 2023, would potentially generate twice as much energy as the 1930s-era dam. Success hinges on a string of uncertainties, including clearing government regulatory hurdles and striking agreements to sell the power that would be essential to secure financing.

With potential shifts in government policy, environmental regulation and the economics of producing green power “any infrastructure project that looks out nine, ten years, has a lot of uncertainties,” Miller, the analyst, said.

Pathfinder Energy, Magnum Energy, Dresser-Rand and Duke-American Transmission Co. said in a statement they plan to submit the blueprint to the Southern California Public Power Authority by early 2015.

California agency officials said they were unaware of the proposal. The authority has been seeking proposals to supply the Los Angeles region with renewable power required under state law.

The new plan “would be competing with 200 other proposals,” said Steven Homer, the director of project management for the authority, whose members deliver electricity to approximately 2 million customers.

Wind development in Wyoming’s wide expanses has surged in the past decade as companies and state officials seek cleaner alternatives to coal.

The proposed wind power development near Chugwater would be a boon to the sleepy ranching town of 216 residents nestled below sandstone bluffs on the high prairie.

A decade ago, in a desperate bid to revive their economically depressed community, town officials sold city lots for $100 apiece on the condition that the buyer would build a house and live there at least two years. Results were mixed, at best: Chugwater’s population dropped 11 percent from 2000 to 2012, even as Wyoming’s overall economy grew and population increased.

If completed, it would become Wyoming’s second-largest wind power project. The biggest is a 1,000-turbine site planned by The Anschutz Corp. That project near Saratoga, in south-central Wyoming, is the largest under development in the U.S.

The rapid growth in wind power has come with a cost, however. The U.S. government estimates at least 85 eagles are killed each year by wind turbines. An Associated Press investigation in 2013 revealed that the Obama administration was not prosecuting wind energy companies for killing eagles and other protected birds.

A lynchpin in the plan would be a $1.5 billion energy storage site near Delta, Utah, 130 miles southwest of Salt Lake City. The rural area already is home to one coal-powered plant that generates electricity for Los Angeles County.

With the push for pollution-free energy sources that can help reduce greenhouse gases blamed for global warming, billions of dollars have been invested in wind and solar projects. Finding an economical way to store renewable energy, however, has been a key issue.

Under the proposal, the energy would be stored through a compressed-air system using caverns, similar to a system that has been used in Alabama since the early 1990s. When energy demand is low, excess electricity would be used to compress and inject high-pressure air into the four caverns, each of which would have 41 million cubic feet of volume. At times of high energy demand, the high-pressure air would be combined with a small amount of natural gas to power eight electricity-producing generators.

An alliance of four companies has proposed an $8 billion project to supply the Los Angeles area with large amounts of electricity from a wind farm in Wyoming. Here are a few things to know about the ambitious project:

– COMPRESSED AIR: Wyoming wind seems to blow year-round, but it’s actually a lot windier during winter. Since Los Angeles residents use more energy in summer, developers plan to build a massive battery of sorts in Utah. The plan involves four underground chambers – a quarter-mile high and almost as wide as a football field – that would store compressed air. Electric pumps would fill the caverns during times of high wind and low demand. It would then be released during times of low wind and high demand, driving turbines that would boost electricity back onto the grid.

– NOT COAL: The nation’s top coal producer has no state mandate requiring utilities to obtain a certain percentage of their electricity from renewable sources. Yet, Wyoming’s abundant wind and unpopulated expanses offer vast options for developers to help utilities in California, Colorado and other states meet their requirements. Wind presents an alternative as Wyoming officials travel to the Far East seeking buyers for coal.

– NOT (QUITE) THE BIGGEST: The $8 billion project would involve building enough wind turbines to power 1.2 million homes with 2,100 megawatts of electricity. That’s a big wind farm – but not quite the biggest on the drawing boards in Wyoming. In the works is a 1,000-turbine, 3,000-megawatt development that Denver-based The Anschutz Corp. is planning near Saratoga in south-central Wyoming. The electricity from this project also is targeted at California.

– SPECIES IN THE WAY: Wind turbines kill large numbers of birds, including federally protected bald and golden eagles. Both species are abundant in Wyoming, yet securing an “eagle take” permit for a massive wind farm could prove easier said than done. Anschutz officials have been waiting for months to secure a permit from the U.S. Fish and Wildlife Service for their project.

– BOOM TO CHUGWATER: The wind farm will be built near a picturesque, oddly named town on Wyoming’s high plains with a population of 200 and falling, despite a plan a decade ago to lure residents by selling city lots for $100 apiece. Any hint of economic development – let alone a huge wind farm – is sure to be welcome news for Chugwater.