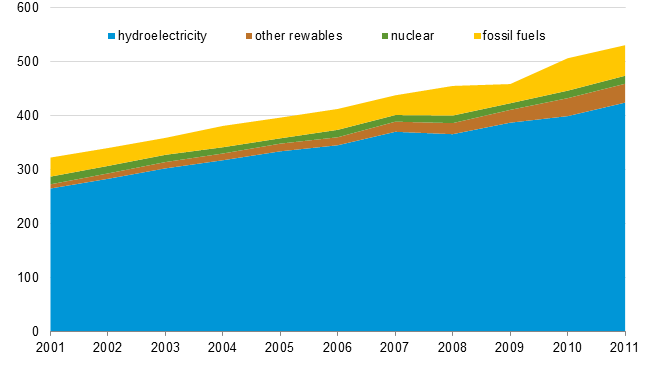 In the near future Brazil will remain South America’s economic engine, as can be seen by the country’s current economic surges.

Many of Brazil’s recent economic successes have been closely related to energy developments, as well as the country’s unique energy infrastructure.

This matrix includes a strong presence of renewable sources, particularly sugarcane and hydropower in addition to traditional fossil fuels. In recent years, Brazil has been more reliant on oil imports and domestic oil exploration to provide for the expansion of its energy needs. The country, however, is trying to reduce its dependence on oil by building out and diversifying its renewable energy infrastructure.

A closer look into Brazil’s recent economic growth reveals that oil exploration has contributed greatly to the country’s economic performance. Off-shore oil exploration in Brazil has surged since the discoveries of oil fields in the south of the county, near Santos (São Paulo) and Rio de Janeiro. Brazil has the second largest proven oil reserves in South America, ~13 billion barrels, second only to Venezuela, and is now South America’s largest producer of liquid fuels with over 2.5 million barrels a day of liquid fuel production, over 2.0 million of which are oil based fuels.

Even though oil has been extremely important for Brazil in the recent past, another type of liquid fuel has historically characteristic of the country’s energy infrastructure: the sugarcane. Brazil is the second largest producer of biofuels in the world, after the United States.

Unlike the United States, which uses corn for biofuel production, Brazil uses sugarcane that grows abundantly in the country’s tropical climate. Brazil has developed an unparalleled infrastructure to promote sugarcane based biofuels, and many cars in Brazil are fueled purely on biofuel. Moreover, the minimum mandate for gasoline blends is set at ~25% ethanol, which is among the highest in the world

Brazil’s commitment to using sugarcane as an sizable energy source has led to biofuels accounting for a substantial part of the nation’s energy matrix. In addition to using sugarcane for bioethanol refinement, Brazilians generate bioelectricity from leftover fibers, stalks and leaves. Sugarcane is Brazil largest source of renewable energy, and second only to oil products in the nation’s overarching energy matrix.

When looking at the energy matrix, another renewable energy source stands out: hydroelectricity. In fact, over 80% of Brazil’s electricity is provided by hydropower. Even though Brazil’s hydropower capacity has been increasing steadily, it has not been enough to fuel the country’s growing electricity needs due to larger industry demand and increasing electrification across the country.

Furthermore, high reliance on hydropower makes the power infrastructure very vulnerable to droughts. In early 2014, Brazil went through a noticeable energy crisis, as the rainfall during the country’s driest months (December to March) was significantly lower than expected, causing some of the hydropower plants to operate at lower capacities. This lead to a substantial amount of brownouts during the summer months earlier this year.

In order to mitigate its high reliance on hydropower, and to power its growing economy, Brazil has been integrating more and more fossil fuels into its energy system in the recent past, particularly oil.

The energy-generation graph above shows how successful Brazil has been in constructing an energy grid that is based on renewable energy. Yet the nation has been relying increasingly on fossil-fuel reliance to maintain economic growth. This has prompted the government to incentivize further renewable energy sources, including wind solar and small hydro.

The greatest success story of those renewables, whose prizes are governed by an auction policy system, is wind energy. Five years ago, wind power was contracted at R$ 370 (~$165 USD), which was more than 3x the price of conventional hydropower traded at ~R$100. Since then, wind energy prices have almost dropped immensely with recent auction prizes ~R$130, representing an almost 66% drop in prices. R$130 makes wind energy competitive, especially if prizes continue to drop, which would lead wind power to becoming an important component of Brazil’s energy portfolio.

Brazil’s abundance in hydropower and sugarcane based bioenergy has given the country a head start in developing a renewable energy infrastructure. Recent surges in energy demands have yielded a greater reliance on oil-based fuels, yet recent developments in wind and solar power, indicate that renewables across the entire spectrum of energies will play an integral role in Brazil’s energy future.