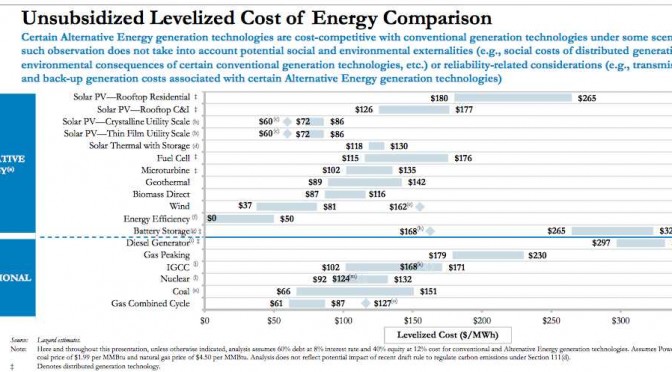 Lazard said that solar energy and wind energy were already competing with fossil fuels on an unsubsidised basis. We’ve now gotten hold of the original report and are reprinting four graphs here, which we find quite stunning because it underlines how quickly the case for more fossil fuels is quickly being eroded.

The first graph is on the unsubsidised levelled cost of energy – a comparison between various renewable technologies and the incumbent fossil fuels. It is based around US experience, so there is the advantage of local manufacturing, experience in installation and maintenance and, most importantly, a low cost of finance.

Wind power, as low as $US37/MWh, and solar energy, as low as $60/MWh in 2017 and $72/MWh now, are competing with the cheapest coal and gas, are comfortably below most coal, gas and nuclear, and way below peaking gas plants, which incidentally, are already more expensive than battery storage and solar thermal with storage. Note that the technology costs do not come with grid integration costs, but nor do they include health, social and environmental impacts.

The second graph looks at the cost of abatement. The conclusion here is policies designed to promote win and large scale solar could be very cost effective in limiting carbon emissions.

Wind energy, according to Lazard’s estimates, offer a net benefit of $31/tonne, and solar a slight cost of $7 a tonne. Little wonder, perhaps, that the likes of Warren Buffett are investing so heavily into renewables, and the Rockefeller heirs have announced plans to dump fossil fuels in favour of renewables.

The next graph is an analysis of the cost of large scale solar vs gas-fired peaking plants. Citigroup has already noted that plans for gas leakers in the US are being dumped in favour of solar (despite relatively low gas prices), and in Australia peaking gas use has been marginalised by the proliferation of rooftop solar.

This graph shows that according to Lazard data the cost of solar energy is well below gas due to high fuel costs. It notes however, that solar lacks the dispatch characterises of conventional peaking technologies.

The last graph is on the recent history of wind power and solar energy costs, just to illustrate how far the costs have fallen in the last five years. The 78 per cent fall in solar PV costs is well documented (in 2009 is was nearly $US400/MWh), but wind energy has also fallen dramatically over th same period. Lazard puts these cost falls down to material declines in the pricing of system components (e.g., panels, inverters, racking, turbines, etc.), and dramatic improvements in efficiency, among other factors.