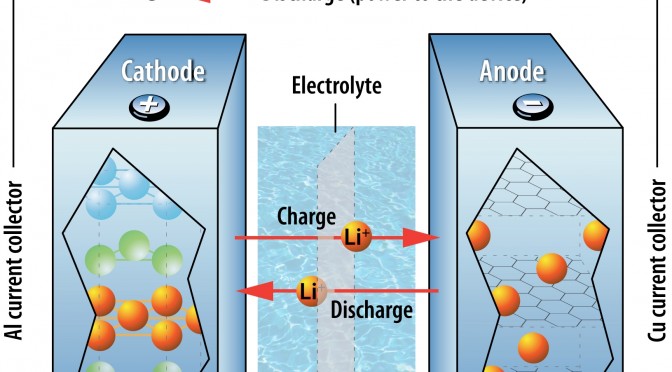 A recent report from Navigant Research analyzes the global market for next-generation advanced batteries, with a focus on the current leading battery chemistry, lithium ion, and the energy storage device types that might eventually replace it.

While lithium ion (Li-ion) batteries offer many advantages over traditional battery technologies, research and development of new battery chemistries that, in many ways, surpass Li-ion is advancing rapidly and is expected to have a major impact on the battery industry in the coming years.  These new chemistries are anticipated to enable even more applications for batteries, thus increasing the overall size of the battery market.

According to a recent report from Navigant Research, the total worldwide capacity of advanced batteries is expected to grow from 30.4 megawatt-hours (MWh) in 2014 to more than 28,000 MWh in 2023.

“The limitations to Li-ion, including input costs, safety issues, and materials scarcity, could leave it vulnerable to new chemistries that solve some or all of those problems,” says Sam Jaffe, principal research analyst with Navigant Research.  “Although most of the chemistries explored in this report are only at laboratory-scale production levels today, they could reshape the market for advanced batteries in the next 10 years.”

Important emerging battery chemistries include ultracapacitors, lithium sulfur, magnesium ion, solid electrolyte, next-generation flow, and metal-air.  Their advent is occurring in the context of an enormous increase in the world’s appetite for advanced energy storage devices, according to the report: Navigant Research expects that overall battery demand is expected to increase from approximately 66.2 GWh in 2014 to greater than 225.3 GWh in 2023.

The report provides an analysis of the market issues and battery landscape associated with next-generation advanced batteries.  Global market forecasts for energy capacity, power capacity, and revenue, segmented by region, application, and chemistry, extend through 2023.

The report also examines the key imminent and emerging technologies related to advanced batteries and provides in-depth profiles of the major industry players.  An Executive Summary of the report is available for free download on the Navigant Research website.