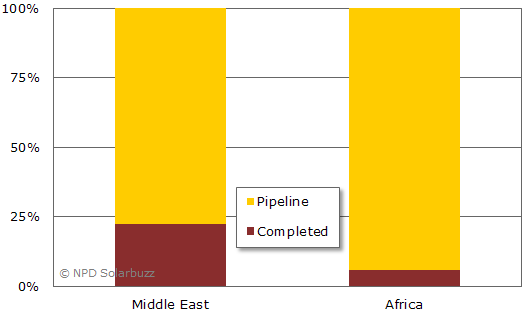 The photovoltaic (PV) market in the Middle East and Africa (MEA) region is set for strong growth, with many multi-megawatt ground mount projects in the planning or pre-planning phases.

“Until now, PV market growth in the MEA region has been mainly driven by a small number of economically prosperous countries, in particular South Africa and Israel,” said Susanne von Aichberger, analyst at NPD Solarbuzz. “These two countries, and Saudi Arabia, are expected to offer stable demand levels within the MEA region over the next few years. The capacity share of the remaining MEA region is projected to increase; however, the increase depends on relatively few, but very large, projects.”

More than 99% of the potential PV capacity listed in the Middle East and Africa Deal Trackeris from ground-mounted projects, and average sizes of these projects in Africa tend to be larger than in most established PV markets. According to von Aichberger, “Economy of scale tends to raise the attractiveness of large projects, but the large size of ground-mount solar parks also increases risk, particularly in countries with previously little or no existing PV markets.”

While the pipeline is extensive, and spread all over the continent, most of Africa’s existing PV capacity is located in South Africa. Completed South African projects comprise nearly 700 MW in the Middle East and Africa Deal Tracker, while identified installations in the rest of Africa amount to one-tenth of this capacity. Just 7% of identified African project capacity has been completed, according to the report.

Projects of 50 MW or above were recently announced in Algeria, Cameroon, Egypt, Ethiopia, Ghana, Kenya, Morocco, Nigeria, Senegal, South Africa, Swaziland, Tunisia, Uganda, Zambia, and Zimbabwe, with the largest pipelines in Kenya and Zimbabwe. Outside of South Africa, multi-megawatt projects have been completed in Benin, Cap Verde, Mauritania, Senegal, and Uganda.

“The fundamental market driver in Africa remains the basic need for energy, especially in sub-Saharan Africa. However, demand is also being driven by project developers that are seeking new overseas markets to compensate for the downturn in PV projects across mainland Europe,” von Aichberger noted. “Growth constraints for PV across Africa include weak energy infrastructure, corruption, and political and social instability.”

In the Middle East, more than 95% of the total PV capacity listed in the Middle East and Africa Deal Tracker is ground-mounted, with the strongest roof-mounted PV demand coming from Israel. Israel is currently the largest PV market in the Middle East, with about 260 MW of completed projects, and over 300 MW of projects in the pipeline; however, large PV projects are expected to emerge in Saudi Arabia, as soon as the country’s renewable energy tender program begins.