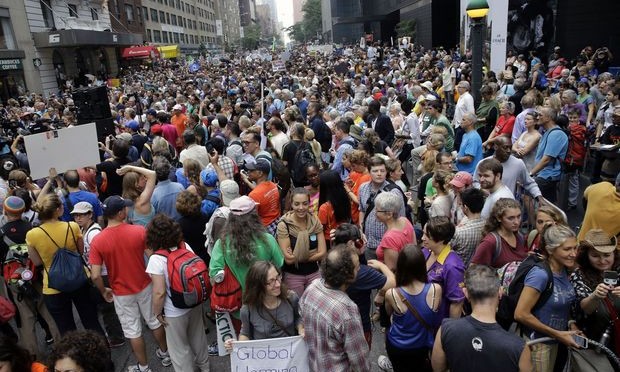 Accompanied by drumbeats, wearing costumes and carrying signs, thousands of demonstrators filled the streets of Manhattan and other cities around the world on Sunday to urge policy makers to take action on climate change.

The march was one of a series of events large and small held around the world organizers said 40,000 marchers took part in an event in London, while a small gathering in Cairo featured 50-foot art piece representing wind and solar energy two days before the United Nations Climate Summit. More than 120 world leaders will convene Tuesday for the meeting aimed at galvanizing political will for a new global climate treaty by the end of 2015.

The New York march drew people from all over the country. A contingent from Moore, Oklahoma â?” where a massive tornado killed 24 last yearâ?” took part, as did hundreds of New Yorkers affected by Superstorm Sandy, which the U.S. National Oceanic and Atmospheric Administration and the British meteorological office said was made more likely by climate change.

Myrtle E. Williams, a nurse at a nursing home in the Rockaways, said Sandy was a “real eye opener.” The storm nearly two years ago “made people wake up and say this is real devastating,” she says.

Williams said Sandy brought home the devastation people usually see on television from far away, like the Asian tsunamis and the hurricanes that hit southern states.

“I think people are becoming more aware when it happens to them,” she said. “When it comes to your door, you can equate with other people who are going through something just as devastating.”

Now the question she asks: “Can we make a change so that this will never happen again?”

In London, celebrities including actress Emma Thompson and musician Peter Gabriel joined tens of thousands of people in the march through the capital’s center.

Campaigners marched through the streets chanting “What do we want? Clean energy. When do we want it? Now.”

Speaking at the start of the march, Thompson said: “This is important for every single person on the planet, which is why it has to be the greatest grass roots movement of all time.

“This is the battle of our lives. We’re fighting for our children,” she said.

In Australia, thousands of people marched in cities across the country on Sunday as part of a global day of action on climate change. The largest rally was in Melbourne, where an estimated 10,000 people took to the streets with banners and placards calling on the Australian government to do more to combat global warming.

Australian Prime Minister Tony Abbott was a particular target of the protesters. Abbott’s center-right coalition has removed a carbon tax and has restricted funding for climate change bodies since coming to power last year.