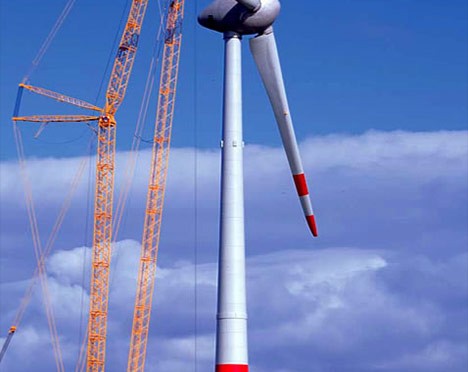 The first export wind turbines of the efficient 3 MW series are currently being installed near Lelystad in The Netherlands and their installation on 135 m (hub height) towers is expected to be completed in the last quarter of this year.

ENERCON launched serial production of the E-115 mid-2014. «The machine‘s introduction to the market went well,» says ENERCON Sales Director, Stefan Lütkemeyer. «And customer response to the new machine is positive. After completing the first domestic projects on schedule, we are now following up with installations in our export markets.» Besides Lelystad, other European projects are already in the planning stages and ENERCON is preparing to launch the product in countries outside of Europe.

The measurement campaign for the certification of the new series has been under way since the E-115 prototype was erected at the end of December near Lengerich (Emsland, Lower Saxony). «We are particularly pleased with the performance of the prototype,» says Stefan Lütkemeyer. For the same number of operating hours, the prototype has already generated more than 18 % more energy than the E-101 in the same wind farm. That‘s 4 % more yield than was forecast by the calculated power curve. «These values are good indications that with the E-115, ENERCON is offering its customers a state-of-the-art wind energy converter which provides the most cost-effective and profitable use of inland sites.»

The E-115 will be on exhibit at ENERCON‘s 256 m² stand at the Hamburg WindEnergy Expo (23 – 26 September). In addition to the new machine, ENERCON will also be presenting updates to its product and services programme as well as insights into current company developments.