After most of the solar industry spent 2012 mired in a competitive, bankruptcy-laden, high-pressure cost environment, 2013 proved to be a rebound year.

Module supplier margins increased, with most tier-1 suppliers topping 10% towards the end of the year and early 2014 despite oversupply remaining somewhat rampant.

Within this, China came to the fore, installing 11.8 GWp in 2013 to become the largest demand market in the world. 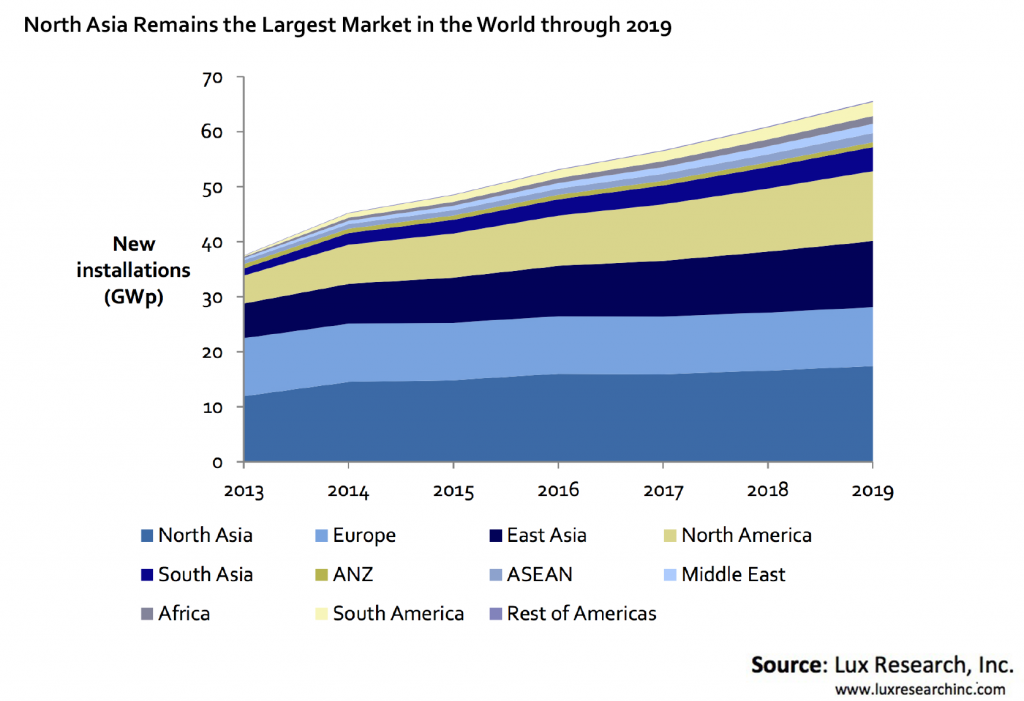 That increase in demand is part of the reason China’s domestic suppliers – including most of the biggest in the world – have improved financial performance. At the other end of the spectrum, Europe has stalled with 2013’s 10.5 GWp representing only slightly more than half of the 19.7 GWp it installed in 2011. That said, with solar now fairly common – or at least acknowledged – in most parts of the world, it reaps the rewards of direct incentives, but also faces uncertainty due to pressure on trade activity with China. Those ongoing disputes – along with broader emissions-related policies throughout the world – create a dissonance, out of which many stakeholders hope to see a stable market emerge.

So with a rosier picture now in place, what does the future hold? In a nutshell, revenue growth, profitability and innovation-driven competitive advantage for those with the right strategy. Focusing on growth, from now until 2019 will see an 8.3% CAGR in new installations to a monstrous 65.6 GW, $117 billion dollar industry. The Americas will be the fastest-growing region in the world, from 5.3 GWp in 2013 to 15.4 GWp in 2019 – a 16.3% CAGR. The U.S. paces the rest of the Americas, growing from 4.7 GWp to 11.7 GWp in 2019, but South America grows 10-fold, from 200 MWp in 2013 to 2.6 GWp in 2019. The Asia Pacific region grows at an 8.2% compound annual growth rate (CAGR) from 20.9 GWp in 2013 to 36.3 GWp in 2019. The region accounts for more than 50% of global demand going forward, led by China and Japan as well as several emerging markets. In contrast, Europe, the Middle East, and Africa grows at a paltry 3% CAGR to 13.8 GWp in 2019. The overwhelming majority of the growth in the region comes from the Middle East and Africa, with Europe stalling around 10 GWp of new installations per year.

In total, the market is either quickly growing, or well established, in most major markets around the world. In addition, given varying types of energy markets and needs, the market is now far more diverse than it had been when dominated by a few countries. That makes the demand market both less risky – policy measures in one market affect a smaller percentage of the total – but also more difficult to navigate. At the same time, market- and application-driven diversity in the market leaves ripe opportunity for various segment-specific technologies to take hold. For distributed systems, high-efficiency modules will continue to remain critical for future development, provided they can compete on cost. A quick hitting approach to ride the growth wave is to peruse the current licensing market, as several conglomerates and research institutions have high-efficiency IP already developed. Materials suppliers can develop regionally-suitable encapsulants and backsheets, as the fragmented, regionalized growth of demand (and some of supply), can yield extra margins, and satisfy risk-averse project developers/owners. Downstream solar companies should work with materials suppliers, module manufacturers, and testing laboratories to develop modules that are more reliable and prevent mass-failures in the 10-year to 20-year period, which is a real risk in more extreme climates.

Those who stayed the course in solar are positioned to win, but the opportunities for new entrants or past participants in the industry are also there for the taking.