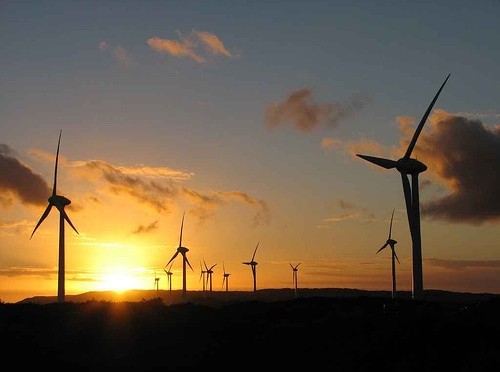 A report released by the Department of Energy Monday shows a substantial increase in the percentage of American-made small wind turbines being sold to other countries, driven in part by Congress’ refusal to act on renewing a key subsidy for the U.S. wind industry, which has created uncertainty in the market.

A vast majority — 76 percent — of the small wind turbines manufactured in the United States were exported to other countries last year, the DOE’s 2013 Distributed Wind Market Report said. That’s a big increase from 2012, when only 57 percent of U.S.-made small turbines were exported. The market for U.S. turbines is spread across the world, too — small wind turbines produced here were sold to more than 50 countries, the report said, with top export markets in Italy, Germany, China, and Mexico, among others.

“To compensate for weaker domestic sales, U.S. small wind turbine manufacturers shifted their focus to growing international markets,” The report read. “Importers interviewed for this report indicated that they spent their efforts in more promising international markets … as it was hard to justify sales efforts in the United States without consistent policy support at the federal, state, and utility levels.”

The wind energy industry has struggled to receive consistent policy support particularly within Congress, which most recently refused to revive the Wind Production Tax Credit (PTC) — a $13 billion yearly tax break to the wind industry that has historically helped them compete with fossil fuels. The PTC for wind is a subsidy that’s been built into the tax code for years to encourage growth in the wind industry, but expired on January 1, 2014 due to Congressional gridlock.

It was likely not the actual expiration of the PTC that caused manufacturers to move away from U.S. markets, though. Rather, it was the fact that Congress has repeatedly waited until the last minute to make a decision about whether to renew it. It was only at the very end of 2012 that the tax credit was renewed, uncertainty that proved to be too much for investors, who mostly chose to invest elsewhere in the face of that uncertainty.

The expiration of the PTC is far from the only thing making the domestic wind energy market “sluggish” though, the report noted. Wind’s distributed generation market competes with solar’s distributed generation market, which is improving with “substantial cost reductions” of solar photovoltaic systems. Federal, state, and local incentives for wind energy generation vary greatly — permitting barriers, unreliable performance predictions, and the lack of available financing also play a part.

Projections for how much wind capacity will be added to the U.S. grid by 2016 vary greatly depending on whether Congress renews the PTC.

Things are looking better the the industry as a whole, though, at least this year and in 2015. Because both the PTC and the Investment Tax Credit (ITC) for wind were actually renewed for one year at the end of 2012, federal tax incentives were available for projects that started construction by the end of 2013. That means “significant new builds” are happening now, which are anticipated to be completed in 2014 and 2015. According to the American Wind Energy Association, more than 12,000 megawatts of wind capacity were currently under construction at the end of 2013.

“These provisions have helped restart the domestic wind market and are expected to spur capacity additions in 2014 and 2015,” the 2013 Wind Technologies Market Report, also released today, read. “With the PTC now expired and its renewal uncertain, however, wind deployment beyond 2015 is also uncertain.”

Projections for how much wind capacity will be added to the U.S. grid by 2016 vary greatly depending on whether Congress renews the PTC. If Congress does decide to renew the PTC, the report indicates that the U.S. will continue to add wind capacity to the grid. If not, it will likely drop off, in part due to competition from the oil and gas industries, which benefit from a wealth of federal tax carve-outs.

Even if the PTC is not renewed, however, there is still hope that other policies will boost wind energy production in the future. The DOE’s technology report noted that investments in wind power could be spurred by the implementation of the EPA’s proposal regulations to reduce carbon emissions from existing and new coal power plants, which may create new markets for wind energy.