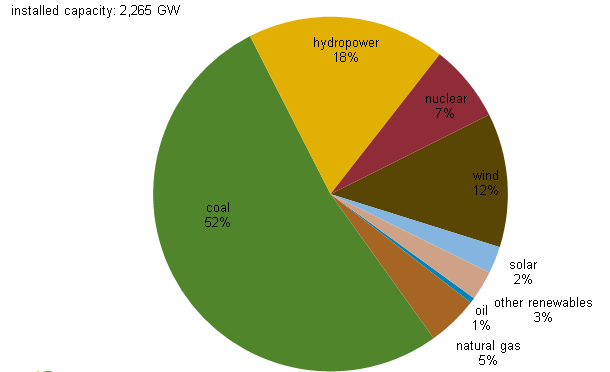 China is the world’s largest producer of electricity, surpassing the United States in 2011, with demand increasing alongside its strong, sustained growth in GDP.

Coal-fired plants currently make up over two-thirds of power generation, which is partly the result of an abundance of coal in China.

However, the growth in electricity production from coal-fired plants has resulted in an increase in air pollution and general lack of efficiency.  China is now moving aggressively to curb pollution and increase the supply of renewable power.  The central government has prohibited new coal-fired plants to be built around Shanghai, Guangzhou and Beijing, which is currently in the midst of having all of its coal plants being converted to natural gas.  Its 12th Five Year Plan, running through 2015, targeted non-fossil fuel energy to account for 15% of total energy consumption.  One of the key industries expected to help meet these goals is wind power.

Based on 90GW of installed capacity at the end of the year and the average wind farm in China operating for 2,000 hours in 2013, up from 1,900 hours in 2012, China’s installed wind capacity was operating at a run rate of 180.0TWh of power generation.

While 15% is the near term renewable target, the potential of wind in China is much greater.  In 2009, researchers from Harvard and Tsinghua University found China could generate all of its power profitably from wind alone, making wind power an attractive alternative to coal power, especially as the government moves to reduce pollution.  While the potential for 100% wind power exists, there are a number of practical issues that must be resolved first, including the country’s power grid.  Roughly 15% to 20% of all of the country’s installed wind capacity is not grid connected, due to the lack of transmission infrastructure.

Like other industries in China, the central government plays a key role in the power industry, controlling the power grid and electricity prices.  The power grid in China is tightly controlled by three State Owned Enterprises, led by the State Grid Corporation of China, which provides power to 88% of China and is the seventh largest company in the world, according to Forbes.  The other two grid companies in China are China Southern Power Grid and Inner Mongolia Electric Power Transmission.  Investment in the Chinese power grid has grown 11.4% annually over the last five years.  This growth should accelerate as the State Grid announced in January it plans to increase power grid construction by nearly 20%, with investments that include constructing ultra-high voltage transmission lines and cross-region grids, which should help spur demand for wind energy and enable off-grid wind capacity to be brought online.

The role of the National Development and Reform Commission (NDRC) on the power production industry is also favorable to wind power.  The NDRC not only sets power prices, but also has the role of pushing for increases in renewable power production through measures such as legally requiring the power grid to purchase all renewable power and establishing a subsidy to spur investment in the industry.  Prices set by the NDRC are generally not based on market dynamics, but rather set based on the greater good of the country.  The price of coal has been volatile in recent years.  This, coupled with the constant electricity purchase price has led to large swings between profitability and losses for these producers.  On the other hand, wind is well suited to thrive in this environment due to its lack of a commodity feedstock and small ongoing operating expenses.

William Gregozeski, CFA is the Director of Research at Greenridge Global, a provider of institutional-based sell-side services to underfollowed Asian-based companies and special situation stocks.  The author of this article, Greenridge Global and its affiliates do not have a beneficial ownership in the companies mentioned herein or any other disclosable conflicts of interest.