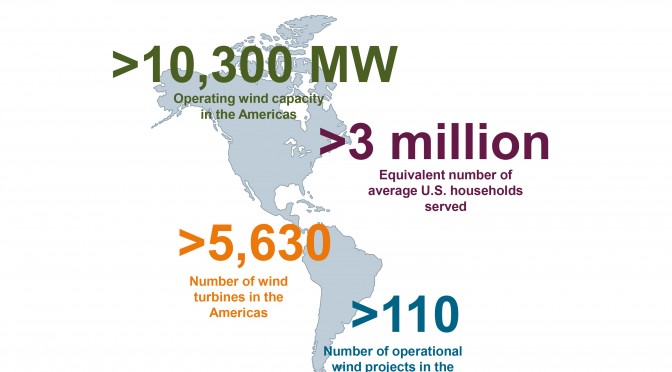 Siemens Energy has reached the significant milestone of ten gigawatts (GW) of installed wind power capacity in the Americas. Siemens has installed more than 5,600 wind turbines in Canada, the U.S. and in South America, including Peru, Chile and Brazil.

Siemens reached the 10-GW installation milestone with the commissioning of the 38th wind turbine at the South Kent wind power project in Ontario, Canada, a few weeks ago. With a rating of 270 megawatts, South Kent is one of the largest wind projects in Canada.

“The Americas wind markets have been our major growth engine in the last years,” says Jan Kjaersgaard, CEO Onshore of Siemens Wind Power. “The U.S., Canada and Latin America have represented up to 50 percent of our yearly installation numbers over the last 10 years. This has allowed us to invest significantly in the Americas in order to serve those key wind markets.”

Siemens’ wind power business has grown significantly since the company opened its Americas headquarters for Wind Power in Orlando, Florida, in 2005. In 2006, the company started producing wind turbine blades at the Siemens Blade Facility in Fort Madison, Iowa. Siemens then opened a nacelle assembly facility in Hutchinson, Kansas, in 2010, which was followed by another blade factory in Tillsonburg, Ontario, Canada in 2011. Additionally, Siemens has invested in Wind Power Service in several locations in the region, including both its Americas headquarters and the new, state-of-the-art wind service training center located in Orlando, Florida, as well as wind service locations in Houston, Texas; Goldendale, Washington; Woodward, Oklahoma; and Chatham, Ontario, Canada.

Wind Power and energy service are part of Siemens’ Environmental Portfolio. Around 43 percent of its total revenue stems from green products and solutions. That makes Siemens one of the world’s leading providers of eco-friendly technology.