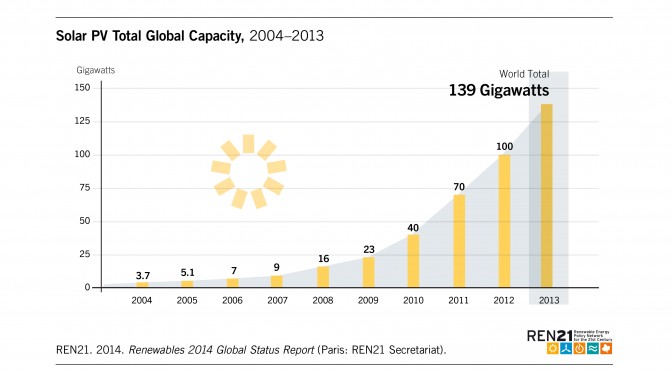 The solar energy photovoltaic PV market had a record year, adding more than 39 GW in 2013 for a total exceeding 139 GW.

Solar PV is starting to play a substantial role in electricity generation in some countries, particularly in Europe, while lower prices are opening new markets from Africa and the Middle East to Asia and Latin America. Interest continued to grow in corporate- and community-owned systems, while the number and size of utility-scale systems continued to increase.

Although it was a challenging year for many companies, predominantly in Europe, the industry began to recover during 2013. Module prices stabilised, while production costs continued to fall and solar cell efficiencies increased steadily. Many manufacturers began expanding production capacity to meet expected further growth in demand.

The year saw a major shift geographically as China, Japan, and the United States became the top three installers, and as Asia passed Europe—the market leader for a decade—to become the largest regional market.

Nine countries added more than 1 GW of solar PV to their grids, and the distribution of new installations continued to broaden. By year’s end, 5 countries had at least 10 GW of total capacity, up from 2 countries in 2012, and 17 had at least 1 GW.

The leaders for solar PV per inhabitant were Germany, Italy, Belgium, Greece, the Czech Republic, and Australia.
Asia added 22.7 GW to end 2013 with almost 42 GW of solar PV in operation. China alone accounted for almost one-third of global installations, adding a record 12.9 GW to nearly triple its capacity to approximately 20 GW.

Capacity has been added so quickly that grid connectivity and curtailment have become challenges. Much of China’s capacity is concentrated in sunny western provinces far from load centers and consists of very large-scale projects, making three state-owned utilities the world’s largest solar asset owners.

Yet there is increasing interest in smaller-scale distributed PV, and the government aims to shift more focus towards the rooftop market.
Japan saw a rush to install capacity in response to its national FIT, adding 6.9 GW in 2013 for a total of 13.6 GW. The majority of Japan’s capacity is in rooftop installations, and homebuilders are promoting solar homes to differentiate their products. For the first time, however, the non-residential sector represented Japan’s largest market. Despite the rise of the large-scale market, many more projects were approved than built in the country due to shortages of land, funds, grid access, qualified
engineers and construction companies, and Japanese-brand equipment.

Beyond Asia, about 16.7 GW was added worldwide, primarily in the EU (about 10.4 GW) and North America (5.4 GW), led by the United States—the third largest country-level market in 2013.
U.S. installations were up 41% over 2012 to almost 4.8 GW, for a total of 12.1 GW. Falling prices and innovative financing options that enable installation with low-to-no upfront payment are
changing the game for U.S. consumers.

The residential sector experienced the greatest market growth relative to 2012, while large ground-mounted projects represented more than 80% of additions. U.S. businesses made large investments in solar PV to reduce energy costs, and some utility companies signed long-term contracts, choosing solar PV over other options based on price alone. Utility procurement continued to slow, however,
as many approached their Renewable Portfolio Standard (RPS) targets. California installed more than half of the new capacity and is the first major U.S. residential market to successfully transition away from state-level incentives.
Europe continued to operate more solar PV capacity than any other region, with more than 80 GW total by year’s end. But the EU’s 10.4 GW (11 GW in broader Europe) added was less than half the 2011 amount, and the region’s share of the global market also fell rapidly—from 82% in 2010 to 26% in 2013.
In most EU markets, demand contracted due to reductions in policy support and retroactive taxes in some countries, which have hurt investor confidence.

Yet solar PV’s share of generation continues to rise, and PV is increasingly facing barriers such as direct competition with conventional electricity producers. Germany remained the largest EU market, but fell from first to fourth globally, adding 3.3 GW after three years averaging around 7.6 GW. With a total approaching 36 GW, Germany still has the most capacity of any country by far. About one-third of the electricity generated from new systems is used on-site, a trend driven by FIT rates below prices for retail electricity.31 The United Kingdom (adding at least 1.5 GW) emerged as the region’s strongest market for large-scale projects, with subsidies attracting institutional investors and developers from across the EU.

Australia installed its one-millionth rooftop system, up from around 8,000 in 2007.35 Over 0.8 GW was added in 2013, as Aussies turned to solar PV to reduce their electricity bills, bringing the total to nearly 3.3 GW. By late 2013, rooftop systems operated on 14% of Australia’s residences, and atop
one-quarter of the homes in South Australia.
In Latin America and the Caribbean, a number of countries had projects in planning or development by year’s end. Markets in Brazil and Chile have been slower to develop than was expected, while Mexico has emerged as a regional leader. Both Chile and Mexico brought several large projects on line in 2013 and early 2014.
Most countries in the Middle East now include solar PV in their energy plans, driven by rapid increases in energy demand, a desire to free up more crude oil for export, and high insolation rates.

During 2013 and early 2014, large plants were commissioned in several countries—including Jordan, Kuwait, Saudi Arabia, and the United Arab Emirates—and a number of governments signed purchase agreements or launched tenders.

There are also many promising markets across Africa. One of the continent’s largest markets to date is South Africa, which has procured substantial capacity under a government bidding process and connected the first plant (75 MW) to the grid in late 2013.

By early 2014, at least 53 solar PV plants larger than 50 MW were operating in at least 13 countries. The world’s 50 biggest plants reached cumulative capacity exceeding 5.1 GW by the end of 2013. At least 14 of these facilities came on line in 2013, including plants in Japan and South Africa (Africa’s largest).
The largest was a 320 MW PV plant in China, co-located with an existing 1.28 GW hydropower dam. The United States led for total capacity of facilities bigger than 50 MW, with a cumulative 1.4 GW in operation by year’s end, followed by Germany, China, India, and Ukraine.

Many projects are planned and under development around the world that range from 50 MW to over
1,000 MW in scale.
The share of commercial and utility-owned PV continued to increase in 2013, but the residential sector also saw strong capacity growth. Many utilities are pushing back against the expansion of distributed PV in several countries, due to concerns about a shrinking customer base and lost revenue. In Europe, for example, some utilities are blocking self-consumption by instituting fees, raising rates on customers with PV systems, or debating the future of net metering; in several U.S. states, debates are intensifying over net metering laws; in Australia, major utilities are acting to slow or halt the advance of solar PV.
Community-owned PV projects are emerging with a variety of models in an increasing number of countries, including Australia, Japan, the United Kingdom, and Thailand, which has a community solar target under its national FIT. U.S. community solar gardens, which sell power to local utilities in exchange for monthly credits to investors, continued to spread in 2013, and some U.S. states have adopted community solar carve-outs in RPS laws.

The concentrating PV (CPV) market remains small, but interest is increasing due greatly to higher efficiency levels in locations with high direct normal insolation and low moisture. CPV continued its spread to new markets in 2013, with sizable projects completed in Australia, Italy, and the United States, and small pilots under way in Chile, Namibia, Portugal, Saudi Arabia, and elsewhere. China commissioned the world largest plant (50 MW) during 2013.57 By year’s end, more than 165 MW was operating in more than 20 countries, led by China and the United States.
Solar PV is starting to play a substantial role in electricity generation in some countries, meeting an estimated 7.8% of annual electricity demand in Italy, nearly 6% in Greece, 5% in Germany, and much higher daily peaks in many countries. By year’s end, the EU had enough solar PV capacity to meet an
estimated 3% of total consumption (up from 0.3% in 2008) and 6% of peak demand; global capacity in operation was enough to produce at least 160 TWh of electricity per year.