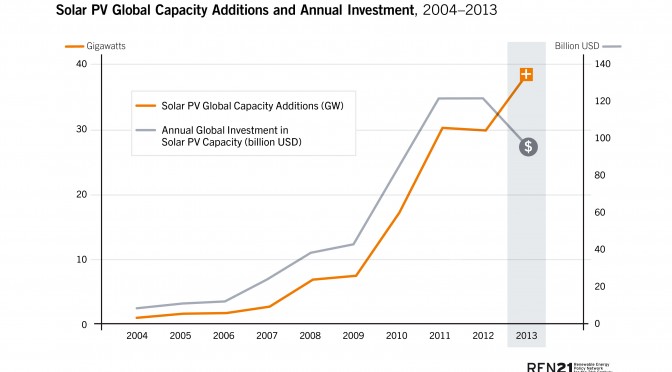 Following a two-year slump, in which oversupply drove down module prices and many manufacturers reported negative gross margins, the solar PV industry began to recover during 2013.

It was still a challenging year, particularly in Europe, where shrinking markets left installers, distributors, and others struggling to stay afloat.

Consolidation continued among manufacturers, but, by late in the year, the strongest companies were selling panels above cost. The rebound did not apply lower down the manufacturing chain, however, particularly for polysilicon makers.

Low module prices also continued to challenge many thin film companies and the concentrating solar
industries, which have struggled to compete. International trade disputes also continued through 2013.
Module prices stabilised, with crystalline silicon module spot prices up about 5% during 2013, in response to robust demand growth in China, Japan, and the United States in the second half of the year.

At the same time, module production costs continued to fall. Low material costs (particularly for polysilicon) combined with improved manufacturing processes and scale economies have reduced manufacturing costs, and far faster than targeted by the industry, with top Chinese producers approaching costs of USD 0.50/W in 2013.

Interest has turned to lowering soft costs to further reduce installed system costs, which have also declined but not as rapidly as module prices (particularly in Japan and the United States). Although investment in solar PV (in dollar terms) was down for the year, actual installed capacity was up significantly, with the difference explained by declining costs of solar PV systems in recent years.
As of 2013, the cost per MWh of rooftop solar was below retail electricity prices in several countries, including Australia, Brazil, Denmark, Germany, and Italy.

By one estimate, solar PV is deemed to be competitive without subsidies in at least 19 markets (in 15 countries). Further, several projects that were planned or under development by year’s end were considered to be competitive with fossil options, without subsidies.
An estimated 43 GW of crystalline silicon cells and 47 GW of modules were produced in 2013, up 20% from 2012, and module production capacity reached an estimated 67.6 GW.
Thin film production rose nearly 21% in 2013, to 4.9 GW, and its share of total global PV production stayed flat year-over-year.
Over the past decade, module production has shifted from the United States, to Japan, to Europe, and back to Asia, with China dominating shipments since 2009.

CIGSi manufacturers, in particular, faced significant challenges due to standardisation and streamlining of crystalline silicon manufacturing and low silicon prices, with several companies entering insolvency or exiting the industry.
China’s large investment in solar PV manufacturing helped create the supply-demand imbalance that led to industry upheaval, and even China has suffered the results. Much of
the older, less efficient capacity was shut down in 2013, as the national government encouraged consolidation and investment in modern facilities to curb oversupply and to improve quality, which suffered when corners were cut to reduce costs. China’s top 10 companies had more than USD 16 billion in debt by August 2013, and Suntech became the first company ever to default on publicly traded debt in China.
Even as some manufacturers idled production capacity or closed shop, others opened new facilities and began expanding capacity across the globe—from North and South America to Europe, Jordan to Turkey, and Kazakhstan to Malaysia.
Ethiopia’s first module-manufacturing facility (20 MW) began operating in early 2013 to supply the domestic market. Massive new builds were planned in China, which is also set to become a serious thin film player, with Hanergy’s acquisition of several companies in 2013. Japanese manufacturers increased domestic production to meet growing domestic demand.
Innovation and product differentiation have become increasingly important. Successful manufacturers have continued expanding into project development, operations, and maintenance.

Manufacturers also joined with utilities and fossil fuel companies to build solar PV plants, while traditional energy and even non-energy companies, such as toll road operator Huabei Express (China), moved further into solar development.
Merger and acquisition activity continued on the development side. Existing large-scale projects were purchased on a far more global scale than in past years, due to increasing ease of financing and growing interest among pure investment firms.

At least two German developers filed for insolvency during 2013, while others expanded their reach—Juwi (Germany) opened a subsidiary in Dubai to serve customers in East Africa and the MENA region.
SunEdison bought EchoFirst (both United States), which offered what it claimed was the first combined solar electric and solar thermal lease for the U.S. residential market.
New business models and innovative financing options continued to emerge, with practices such as solar leasing spreading beyond the United States to Canada, Europe, the Pacific, and elsewhere.
In late 2013, Toshiba (Japan) entered the solar power business in Germany, installing PV systems on apartment buildings and selling electricity to residents directly; systems will be owned and funded by a group of pension funds.

New models also are emerging in Latin America, including the sale of PV electricity into the wholesale market (rather than through long-term contracts), with such merchant plants being built in Chile and Mexico.
Solar cell efficiencies continued to increase with more records announced during 2013. Perhaps the biggest technology advance centered on perovskite materials, which experienced a steep rate of efficiency improvement during 2012 and 2013.
They offer the potential for high-performing yet inexpensive solar cells, although they have significant challenges to overcome before coming to market.
CPV had a mixed year in 2013, with key companies closing plants and consolidation affecting both module and system suppliers.
At the same time, the industry saw new strategic partnerships and expansions in manufacturing capacity.

Soitec (France) announced plans to consolidate by closing its 40 MW plant in Freiburg, Germany, but also achieved full production capacity at its factory in California, and partnered with Alstom (France) to develop CPV plants in France.

Solar Junction and Amonix (both United States) partnered to improve CPV efficiency.
The industry is showing signs of moving beyond niche markets, with Soitec building a 44 MW project in South Africa, and several companies announcing or commissioning production lines in 2013 to meet growing interest in China.

New cell and module conversion efficiency records were set in 2013, and improvements to mirror and tracker technologies continued.
Solar inverters are becoming more sophisticated to actively support grid management, and are considered one of the fastest developing technologies in power electronics.

Partly because of this rapid development, in 2013 ABB (Switzerland) acquired Power-One (United States), one of the world’s largest manufacturers of solar power inverters. At the same time, the industry has become increasingly crowded and markets more fragmented, and the largest incumbents faced challenges maintaining growth or even surviving in 2013.

Inverter manufacturers were under pressure to reduce prices, as the European market slowed faster than expected and as the focus of cost-cutting efforts turned increasingly towards balance-ofsystem technologies.