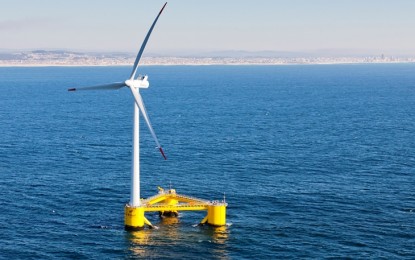 A coalition of leading environmental and conservation organizations — Conservation Law Foundation (CLF), Natural Resources Defense Council (NRDC) and National Wildlife Federation (NWF) — and Deepwater Wind today announced an agreement to implement additional protections for endangered North Atlantic right whales during pre-construction activities for the Deepwater ONE offshore wind farm, which will be developed off the Rhode Island and Massachusetts coasts.
CLF, NRDC and NWF have developed a set of protective measures with Deepwater Wind that will minimize potential impacts on North Atlantic right whales and other marine mammals from underwater noise and construction vessels during the developer’s site characterization and assessment activities.

“We take our responsibility to be a national leader in responsible offshore wind development very seriously, and ensuring marine mammals are protected is just one way we’re fulfilling our commitment,” said Jeffrey Grybowski, CEO of Deepwater Wind.

“By working with CLF and our partners to protect North Atlantic right whales and other marine mammals, Deepwater Wind shows that offshore wind can achieve its potential to reduce our reliance on fossil fuels while maintaining great sensitivity to our important natural resources,” said Tricia K. Jedele, Vice President and Director of Conservation Law Foundation’s Rhode Island Advocacy Center. “We are proud to partner with Deepwater Wind, NWF and NRDC to come to this significant agreement, and hope our collective work will be replicated nationally to help bring the economic and environmental benefits of clean, renewable offshore wind power to communities throughout the U.S. without compromising vulnerable marine animals.”

The measures outlined in the agreement provide further protections for the North Atlantic right whales, including a commitment by Deepwater Wind to avoid all noise-producing activities during specific periods in the spring when North Atlantic right whales have been known to frequent Rhode Island Sound, as well as reduced speed limits for all vessels involved in site characterization and assessment activities for the Deepwater ONE project during these periods.

“This industry leader is demonstrating that smart from the start development can help American offshore wind get off the ground faster—so it can start delivering clean, climate change-fighting energy that benefits all creatures on this planet,” said Kit Kennedy, Director of the Energy and Transportation program at the Natural Resources Defense Council. “Many of these endangered whales have been spotted in this area of Rhode Island Sound, making these additional protections particularly important for their conservation.”

Construction at the Deepwater ONE site could begin as early as 2017, with commercial operations by 2018. Deepwater ONE will produce enough energy to power approximately 120,000 homes annually and displace significant greenhouse gas emissions annually.

Details of the Agreement

The full details of the latest agreement can be found here: http://www.clf.org/right-whales-offshore-wind.

The agreement reduces the threat to right whales by restricting meteorological tower construction and certain other site activites during the peak foraging season, when whales venture to southern New England waters to feed. During other times of the year, when the whales frequent the area less, the activities may occur with additional protective measures in place.

These additional protective measures include: enhanced real-time human monitoring for whale activity in the site area; restriction of pile driving activities to daylight hours when whales can be spotted; use of noise-reducing tools and technologies; and a lower speed limit for vessels during periods in the spring when North Atlantic right whales have been known to frequent Rhode Island Sound.

The agreement—which was developed with input from leading right whale scientists, including those from the New England Aquarium—also has the support of the International Fund for Animal Welfare, the Sierra Club and Environment America.

In 2012, a coalition led by CLF, NRDC and NWF, working together with Deepwater Wind, Energy Management, Inc. (owner of Cape Wind in Massachusetts) and NRG Bluewater Wind, drafted a similar set of protective measures that developers agreed to implement in the Mid-Atlantic Wind Energy Areas, which stretch from New Jersey to Virginia.

An agreement between Deepwater Wind and CLF in October 2013 restricts all Block Island Wind Farm foundation construction activities during the month of April. This agreement will be reflected in the stipulations to any approval granted to Deepwater Wind by Rhode Island’s Coastal Resources Management Council.

Conservation Law Foundation (CLF) protects New England’s environment for the benefit of all people. Using the law, science and the market, CLF creates solutions that preserve natural resources, build healthy communities, and sustain a vibrant economy region-wide. Founded in 1966, CLF is a nonprofit, member-supported organization with offices in Maine, Massachusetts, New Hampshire, Rhode Island and Vermont.
The National Wildlife Federation (NWF) is America’s largest conservation organization with an over 75-year history of inspiring Americans to protect wildlife for our children’s future. NWF believes that responsibly-developed renewable energy is critical for protecting wildlife from the dangers of global warming. NWF is headquartered in Washington DC with regional offices in Vermont, Maryland, Texas, Michigan, Colorado, Montana, and Washington.
The Natural Resources Defense Council (NRDC) is an international nonprofit environmental organization with more than 1.4 million members and online activists. Since 1970, our lawyers, scientists, and other environmental specialists have worked to protect the world’s natural resources, public health, and the environment. NRDC has offices in New York City, Washington, D.C., Los Angeles, San Francisco, Chicago, Bozeman, MT, and Beijing.
Deepwater Wind is a leading U.S. offshore wind and transmission developer. The Company is led by a veteran management team with extensive experience in developing renewable-energy projects in the northeastern United States. The Company is actively planning offshore wind projects to serve multiple East Coast markets located 15 or more miles offshore, including New York, Massachusetts, Rhode Island, and New Jersey. The Company’s Block Island Wind Farm is on target to become the nation’s first offshore wind farm.