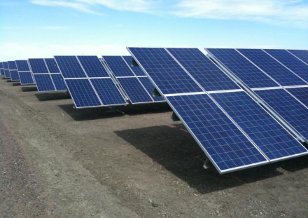 Photovoltaic (PV) modules typically come with 20 year warranties that guarantee that the panels will produce at least 80% of the rated power after 20 years of use. The general rule of thumb is that panels will degrade by about 1% each year.

The National Renewable Energy Laboratory (NREL) performed a meta-analysis of studies that examined the long term degradation rates of various PV panels. They found that the 1% per year rule was somewhat pessimistic for panels made prior to the year 2000, and today’s panels, with better technology and improved manufacturing techniques, have even more stamina than their predecessors. For monocrystalline silicon, the most commonly used panel for commercial and residential PV, the degradation rate is less than 0.5% for panels made before 2000, and less than 0.4% for panels made after 2000. That means that a panel manufactured today should produce 92% of its original power after 20 years, quite a bit higher than the 80% estimated by the 1% rule.

Crystalline silicon modules located in extreme climates showed high degradation rates. For very cold climates, panels subjected to heavy wind and snow loads suffered the most. On the other hand, panels in similar climates that were installed in a facade, eliminating the snow load, had very low rates of degradation. At the other extreme, panels in desert climates exhibited large decreases in production over time – close to 1% per year – mainly due to high levels of UV exposure. Panels in more moderate climates such as the northern United States had degradation rates as low as 0.2% per year. Those panels could retain 96% of their production capabilities after 20 years.

Degradation rates are used in solar site assessments in order to estimate the energy production over the life of a system and to calculate the payback period and return on investment. Like everything in engineering, we always assume the worst and hope for the best, so overestimating the degradation rate isn’t necessarily a bad thing. On the other hand, we want realistic estimates so we don’t scare away potential customers who think they’ll need to replace their modules after 25 years. Given the results of NREL’s analysis, it may be beneficial to adjust the rule of thumb so it accounts for the conditions under which the panels will operate.