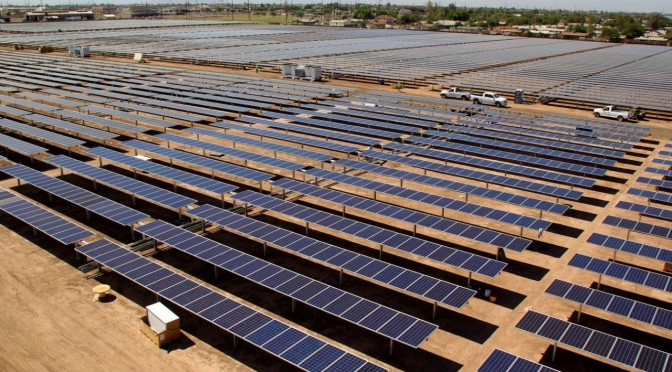 For years Pakistanis have sweated and cursed through summer power cuts, but now the government plans to harness the sun’s heat to help tackle the country’s chronic energy crisis.

In a corner of the Cholistan desert in Punjab province, power transmission lines, water pipes and a pristine new road cross 10,000 acres of parched, sandy land. The provincial government has spent $5 million to put in place the infrastructure as it seeks to transform the desolate area into one of the world’s largest solar power parks, capable one day of generating up to 1,000 megawatts of electricity.

The desert park in Bahawalpur district is the latest scheme to tackle the rolling blackouts that have inflicted misery on people and strangled economic growth. Temperatures can reach 50 degrees Celsius in the country’s center in June and July, sending demand for electricity soaring and leaving a shortfall of around 4,000 MW.

“In phase one, a pilot project producing 100 MW of electricity will hopefully be completed by the end of this year,” said Imran Sikandar Baloch, head of the Bahawalpur district administration. “After completion of the first 100 MW project, the government will invite investors to invest here for the 1,000 megawatts.”

Engineers and laborers are working in the desert under the scorching sun to complete the boundary wall, with authorities keen to begin generating solar electricity by November. “If you come here after one and a half years, you will see a river of [solar] panels, residential buildings and offices—it will be a new world,” said site engineer Muhammad Sajid, gesturing to the desert.

Besides solar, Pakistan is also trying to tap its unexploited coal reserves, which lie in another area of the same desert, in Sindh province. In January Prime Minister Nawaz Sharif inaugurated construction on a $1.6 billion coal plant in the town of Thar, in Sindh. Work has also begun on a pilot 660-megawatt coal-fired plant in Gadani. Another 600-megawatt coal plant has also been given the go-ahead in the southern city of Jamshoro. But while coal may offer a short-term fix to the energy crisis, authorities are keen to move to cleaner electricity in the long run.

“We need energy badly and we need clean energy, this is a sustainable solution for years to come,” said Baloch. “Pakistan is a place where you have a lot of solar potential. In Bahawalpur, with very little rain and a lot of sunshine, it makes the project feasible and more economical,” he said.

Baloch believes that the new solar park will make Pakistan a leader in that energy in the region. The initial pilot project is a government scheme but private investors are also taking an interest.

Raja Waqar of Islamabad-based Safe Solar Power is among them. His company plans to invest $10 million to build a 10 MW project in the new park. “The government has allotted us land over here. Infrastructure—the transmission line and road are available here, that is why we are investing,” said Waqar. A million dollars per MW is a sizeable investment but Waqar said the company expected to reap returns on it over at least the next decade—and others were keen to get on board.

“There are up to 20 companies who are investing in this park and their projects are in the pipeline,” he said. “Some of them are working on 50 MW, some on 10 and others on 20.”