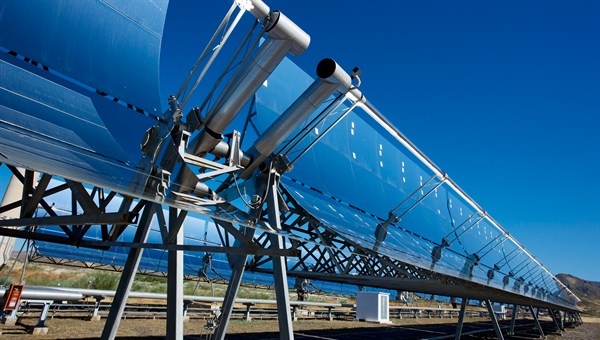 The Stillwater geothermal energy plant, consisting of two binary-cycle units, will be integrated with the parabolic trough CSP system so that they contribute to the same turbines. The hybrid plant will thus combine the continuous generating capacity of binary-cycle, medium-enthalpy geothermal power with daytime peak generation from the solar thermal component.

The CSP system heats tubes of pressurized water. The integration work will enable the CSP component to raise the temperature of the geothermal fluid extracted from the wells to improve the cycle’s yield and increase its electricity output.

Enel Green Power has started work on the construction of two innovative facilities: in Ollagüe (Chile), on the Bolivian border and in Nevada, USA.

In Chile, the renewable company will construct a plant comprising photovoltaic power, a mini-wind turbine generator and a co-generation system for producing both electricity and hot water for the village school. The plant is expected to have an installed capacity of 232 kW as well as generating approximately 460 MWh/year, equivalent to the electricity consumption of 150 households. The power plant will be stand-alone, in other words, it will not be connected to the national grid and will also include a 520 kWh electro-chemical storage system. Said system will be capable of meeting all the technical needs of the network. Thanks to this project, local residents will finally be able to enjoy electricity 24 hours a day.
In Nevada, USA, Enel Green Power North America has started works on the construction of a solar thermodynamic power plant to operate alongside the existing Stillwater geothermal power station, which is already paired with a 26 MW photovoltaic facility.
This is the first hybrid plant in the world able to combine the continuous generating capacity of binary-cycle, medium-enthalpy geothermal power with solar thermodynamic.
The Stillwater geothermal plant, with a total net installed capacity of 33 MW, will be integrated with a 17 MW solar thermodynamic facility. The linear parabolic mirrors of the new thermodynamic plant boast reflecting surfaces capable of concentrating solar radiation, raising its potential some 75 times, inside receiver tubes filled with demineralised water under pressure.
The solar thermodynamic plant will be capable of generating approximately 3 million kWh/year, to be added to the power currently being generated by the existing hybrid plant.
The energy produced will be sold to NV Energy, through the existing 20-year Power Purchase Agreement (PPA).
Thanks to the innovative technology that will enable the use of the sun’s heat to raise the temperature of the geothermal fluid extracted from the wells, it will be possible to improve the cycle’s yield and increase its electricity output.
Combining several renewable sources at the same location is one of the guidelines along which the Enel Green Power innovation strategy is being developed. Combining several renewable power generation technologies also increases zero-emission output as well as making it possible to rely on the same infrastructures, such as electrical interconnection lines, thereby further reducing environmental impact.
Enel Green Power’s efforts in the renewable sector are focused on the performance of existing technologies (hydro, wind and geothermal), improving their availability as well as mitigating the effects associated with intermittency. The company is also working on renewable sources not utilized so far, to secure higher levels of energy supply, also in remote areas.
Enel Green Power is the Enel Group company fully dedicated to the development and management of renewable energy sources at the international level, with operations in Europe and the Americas. The company generated over 29 billion kWh in 2013 from water, sun, wind and the Earth’s heat – enough to meet the energy needs of more than 10 million households and avoid the emission of over 20 million tonnes of CO2 into the atmosphere. Enel Green Power is a world leader in the sector thanks to its well-balanced generation mix, providing generation volumes well over the sector average. The company has an installed capacity of approximately 8,900 MW from a mix of sources including wind, solar, hydroelectric, geothermal, and biomass. Currently, the company has approximately 750 plants operating in 16 countries in Europe and the Americas.
http://www.helioscsp.com/noticia.php?id_not=2433
Concentrated Solar Power, Concentrating Solar Power, CSP, Concentrated Solar Thermal Power, solar power, solar energy, Enel Green Power,