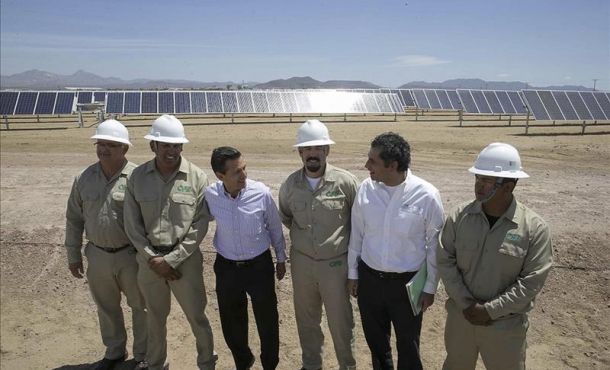 The Aura Solar I photovoltaic power plant was inaugurated by Mexican President Enrique Peña Nieto on Wednesday and will supply electricity to the city of La Paz.

The goal is to turn Mexico into “a country that attracts greater investment for the development and creation of jobs,” the president said.

The Climate Change Law requires that this number go up to 35 percent by 2024, the president said, adding that he was confident that the goal would be met.

The Aura Solar I power plant, which is owned by Corporacion Aura Solar and quadrupled Mexico’s installed photovoltaic capacity, will be “a model of success that will be duplicated in other parts of the country,” Peña Nieto said.

“This photovoltaic power plant is not just the first large-scale one of its type in Mexico, but also the biggest in all of Latin America,” Corporacion Aura Solar chairman Daniel Servitje Montull said.

The $100 million energy project was developed on a 100-hectare (247-acre) site in La Paz by Mexico’s Gauss Energia and Martifer Solar, an international engineering company that has experience in building solar power facilities.

Aura Solar I, which has an estimated operational life of 30 years, has about 132,000 solar panels and is expected to prevent the emission of 60,000 tons of greenhouse gases annually.

The emission of greenhouse gases is believed to contribute to global warming.

The Aura Solar I power plant will supply electricity to about 164,000 people, or about 64 percent of La Paz’s residents.