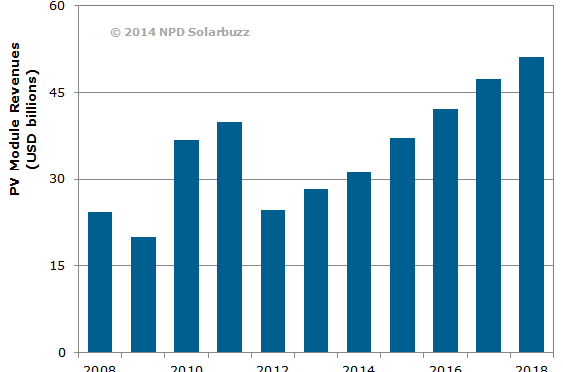 The solar photovoltaic (PV) industry is set for rapid growth over the next five years, with up to 100 gigawatts (GW) annual deployment being targeted in 2018, according to the latest edition of NPD Solarbuzz Marketbuzz. This end-market growth is projected to increase annual PV module revenues, which are forecast to reach $50 billion in 2018.

Despite being severely hampered by overcapacity and declining operating margins during 2012 and 2013, the PV industry still grew 34% over this two-year period. Having grown to more than 37 GW of end-market demand in 2013, the global solar PV industry is now set to hit a new milestone in 2018, reaching a cumulative installed capacity level of 500 GW. This strong demand will also further stimulate revenues for the industry’s manufacturers, with PV module revenues of more than $200 billion available over the five-year period from 2014 to 2018.

“Solar PV module prices declined faster than the end-market grew in 2012, leading to a dramatic decline in revenues,” said Michael Barker, senior analyst at NPD Solarbuzz. “This imbalance was corrected during 2013. Over the next five years, end-market growth will exceed forecasted price declines, resulting in a strong rebound in module revenues.”

From a technology standpoint, crystalline silicon (c-Si) based modules are forecast to increase market share over the competing thin-film variants. Between 2014 and 2018, 91% of solar PV modules produced are forecast to be c-Si types.

PV module average selling prices (ASPs) are expected to decline moderately over the next few years and are forecast to reach $0.51 per watt (W) in 2018. In addition, system prices will decline each year, driven mainly by cost reductions in balance-of-systems components and economies-of-scale improvements enabled by project developers and installers.

“Solar PV suppliers are benefiting from a less volatile pricing environment, compared to previous years,” said Finlay Colville, vice-president of NPD Solarbuzz. “The industry will soon transition to a phase of profitable growth, with solar PV competing directly with traditional forms of energy.”