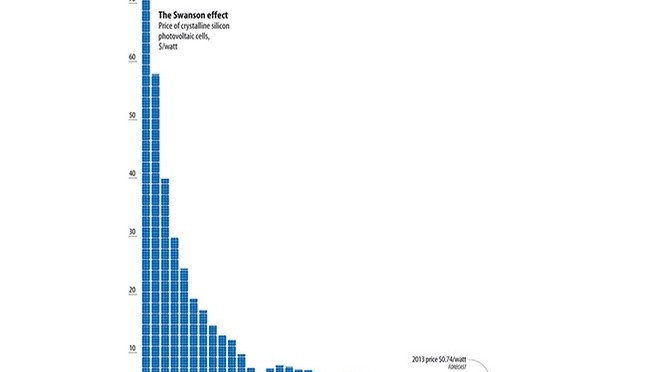 Consolidation: it’s been one of the most heavily used words in the PV industry over the past couple of years.

Lots of people want to believe it is happening. Some outside observers talk it up, because it helps rationalize the PV industry into becoming an understood segment from the supply side. Some manufacturers (actually, many of them) are desperate for it to happen to reduce the competitive landscape. At the governmental level also, it is a great word to use to show the outside world that (domestic) fiscal prudence is being prioritized over aspirations of global domination (at any cost).

Before returning to some of the issues above, let’s first look and see if the whole consolidation issue has any merit.

There are various ways to approach this question. But since there is rarely any supporting data behind those citing the consolidation word, let’s try a quick back-of-the-envelope analysis now.

The source of the data shown shortly is the January 2014 edition of the NPD Solarbuzz PV Equipment Quarterly report (that tracks discrete production lines over several hundred cell and thin-film makers at the process flow level).

The output is shown in the attached figure. If there was consolidation going on, then the percentage of the market each year supplied by the top-10 and top-20 would show a strong uptick. This would then be carried forward across the other ranges, out to the top-100.

A quick glance at the figure however shows this is clearly not happening. In fact, the share from the top-10 is actually going down, not up, from 43% in 2010 to 38% in 2014. Looking at the top-30 also gives a sense of what is happening, with the contribution from the top-30 held almost static at 69-71% for the five-year period.

This is actually in contrast to module supply statistics – but it should be remembered that increasing module shipments does not actually mean any change to in-house production. Market share contributions from producers of solar PV cells (c-Si and thin-film) by year suggest that consolidation is not happening at the midstream stage of the PV industry.

The reality of the consolidation and shakeout is that most of the companies that have got the headline news for going insolvent, or being used as a political tennis ball, were never actually supplying anything to the PV industry. Or if they were, it was pretty low volumes, and not affecting the macro picture.

In fact, despite all the rhetoric surrounding the consolidation buzzword, it is really hard to see that much evidence of this, at least at the solar cell production stage. Yes, the cell stage is somewhat different to the other stages, but it a fairly good metric to use to get the point over and is better than looking at module supply.

Exiting the solar industry is still proving a challenge to many companies clinging to the hope of regaining competitiveness within an end-market flush with growth potential. This can be seen in Europe and China, but also in Korea and India.

Whether a meaningful number of the lower tier cell companies get acquired by market leaders is yet to be seen, or if any of them want to, or are forced to. One could almost surmise that, if many of these companies have limped through the crisis of 2012 and 2013 and are still around and have other revenue streams, why should they seek to offload the PV operations? The market environment is better for most at the start of 2014 and CapEx is coming back for the leading makers (to buy new equipment). Some upgrade spending to cell lines and production can be restarted very quickly for almost all of the top-100 c-Si cell makers.

If the top-10 or top-20 contribution is to reach or exceed the 90% level, then it will be CapEx that enables this, as opposed to scouting the market for distressed assets. And it is unlikely to be consolidation that gets us to this stage, but more elimination of companies that finally decide to throw in the towel on the PV industry for good or simply have their credit line terminated.