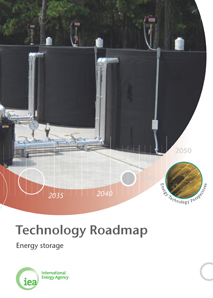 Energy storage technologies – spanning everything from electric water heaters to pumped hydro – are valuable components in most energy systems and could be an important tool for achieving a low-carbon future.  In a new report released today, the IEA estimates that China, India, the European Union and the United States alone should invest at least USD 380 billion in new electricity storage capacity by 2050 to support decarbonisation.

By setting aside energy for use when and where it is needed, energy storage – both electricity and thermal (for heating and cooling) – can decouple supply from demand, increasing system flexibility and improving reliability. It is expected that storage could play a key role in coming decades in facilitating the expansion of variable renewable energy sources like wind and solar.

“Energy storage technologies can play a key role in energy sector decarbonisation by helping to better connect electricity and heat networks,” Didier Houssin, IEA Director of Sustainable Energy Policy and Technology, said at the Paris release of the roadmap. “Furthermore, these technologies can improve the efficiency of energy resource use and increase energy access, which are critical components of a secure, sustainable energy system for all.”

Technology Roadmap: Energy Storage, the latest in the series of IEA publications that show how different technologies can speed the transition to a low-carbon energy system, can be downloaded for free here.

Storage systems can be defined by how long they can store energy, from systems that hold solar power for use at night to seasonal systems that save summer heat to warm homes in the winter. On the shortest-term basis, electricity storage systems can shift supply and demand within an area to correct load imbalances, avoiding brownouts and blackouts. Storage includes large, centralised systems as well as small and off-grid units.

Electricity and thermal storage technologies exist at widely varying stages of development and cost-competitiveness. But even cost-competitive technologies face difficult regulatory and market conditions that hinder deployment. More investment in research and development is needed to increase performance and lifetime while reducing costs. Technology Roadmap: Energy Storage presents recommendations for such investment and also how to ensure that economically viable technologies are compensated for the many services that they can supply. It also provides timelines for targeted actions worldwide to help less competitive technologies reach the deployment stage.

Besides heating and cooling buildings worldwide already, the new report explains, thermal storage systems can be used to reduce heat waste from manufacturing and electricity production.