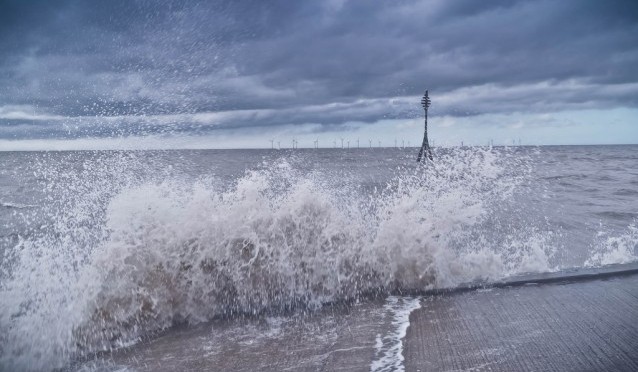 Wind energy is one of the fastest growing sources of new electricity around the world. In 2012, global wind energy capacity grew by 19 percent, with more than 150,000 turbines operating in 90 countries.

Now a new study suggests offshore turbines could have an additional environmental benefit: weakening the power of hurricanes.

“The first thought I had was, well maybe the turbines would extract enough power from the hurricane to diminish the hurricane, but I couldn’t prove that yet, unless I ran some numerical simulations,” he said.

So, Jacobson, co-author of the study in Nature Climate Change, ran the numbers on three of the most powerful hurricanes to hit the U.S. East and Gulf coasts in recent years. The model simulated (http://www.youtube.com/watch?v=M7uRtxl8j2U) what would happen if large wind farms with tens of thousands of turbines had been in the path of those storms.

“We found that the hurricanes would be dissipated quite a bit if you have large arrays of offshore wind turbines,” Jacobson said. “The storm surge could be reduced by up to 79 percent and wind speeds by 50 percent or even more.”

The resulting milder winds would also prevent damage to the turbines. Jacobson explains that as the hurricane approaches, the spinning turbines remove energy from the storm’s edge and slow down the wind behind it. That slowdown in turn would lower wave height and reduce the winds that push those waves toward the coast.

“So by the time the hurricane gets to shore, it’s significantly weakened,” he said. “And storm surge is due to winds going long distance over the water, and the storm surge is reduced quite a bit as well,” Jacobsen said. “So [there are] these two benefits, reduced wind and reduced storm surge, due to the large arrays of offshore turbines.”

Storm surge leads to flooding and death, says University of Delaware professor Cristina Archer, a co-author of the study. She says barrier walls or islands buffer storm surge, but, the study shows turbines can also play a role.

Archer suggests locating wind farms in offshore hot spots where they could tap the wind for electricity, offsetting fossil fuel use and its resulting emissions and pollution. They could also act as insurance against storm damage, as the study simulations demonstrate.

“If you can be smart about it, then you can have still very, very high benefits and locally. So, for example, for [Hurricane] Katrina, we placed the turbines just up wind of New Orleans,” she said. “And, so we protected New Orleans by taking action in New Orleans. So [we showed that] local actions had actual local benefits.”

That 2005 hurricane on the Gulf Coast was the costliest natural disaster in U.S. history, with a death toll in the thousands.

The study suggests that while there has been political and social resistance in the United States to installing even a few hundred offshore wind turbines, let alone tens of thousands, a wind farm would pay for itself in the long term by generating power and helping to reduce hurricane damage.

Archer sees partnerships developing among policy makers, emergency managers and the wind industry that could lead to new strategies for coastal power and protection that can also save lives.