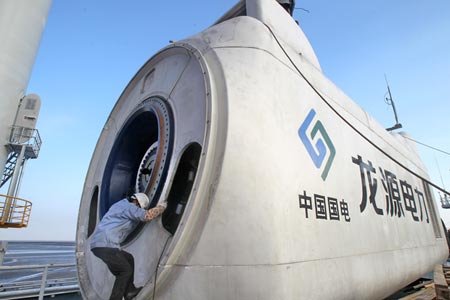 As per a new report by Quartz+Co and MEC Intelligence, the recent developments on policy front, local stakeholder ambitions, and project development indicate a shift towards growth in China’s offshore wind market.

However, the local industry is still young and European companies should be ready to take advantage of their experience and the capabilities to explore the opportunity.
In the past five years, offshore wind has grown to become the fastest growing Cleantech technology in Northern Europe. Expectations for growth in the industry far exceed anything ever experienced before in the Cleantech sector.
The industry though traditionally concentrated in Northern Europe and around the North Sea, is now anticipating a major shift in its centre of gravity. A roundup of recent trends and developments in the industry indicates that China is expected to be a front-runner in terms of installed capacity of offshore wind.
High Ambitions & Evolving policy and supply chain
The Chinese government in 2010 set a target of 30GW installed offshore wind capacity by 2020. Comparatively the global offshore wind installed capacity itself stood at 5,480 MW at the end of 2012; Europe and China accounting for 90% and 9% of the market share respectively. Europe is expected to have an installed capacity of ~30GW itself by 2020.
The target is widely considered to be ambitious considering that the offshore wind industry is at a nascent stage, with only a few projects having been installed so far. And there being a lack of clear plan and approval mechanism.
Policy and projects gaining momentum
Activities over the last one year, however, show that the industry is beginning to enter into growth phase. Offshore wind has recently been given priority status and it augurs well for the development of the industry. The government has taken the first step towards rectifying the problem of low tariffs ranging between EUR 0.08-0.09/kWh in first concession bidding by trying to discover benchmark prices through direct approvals. It is expected that competitive benchmark prices will be introduced to upsurge the pace of development. Furthermore, the government has extended its learning from onshore wind and has introduced a grid connection approval mandate before construction begins to avoid curtailment due to lack of grid connection. Most importantly, long standing projects have been granted approval and 628 MW projects are already under construction, and about 3.4 GW of projects being consented in Hebei, Jiangsu, Shanghai, Zhejiang Fujian & Guangdong.

On planning front, 9 coastal provinces have submitted their OW development plans to NEA which cumulatively (>35 GW) exceeds the national targets. Till date, plans for Shanghai, Shandong, Hebei, Guangdong and Jiangsu has been approved by the state, Zhejiang and Hainan offshore wind have been reviewed and are being modified. Fujian has completed its planning report and plan for Guangxi is under preparation.
Interest in developing the industry remains high. Onshore wind developers such as China Longyuan Power Group, China Datang Renewables, Huaneng New Energy; renewable energy subsidiaries of nuclear generation company China Guangdong nuclear and hydro power developer China Three Gorges see this as an opportunity for growth. Oil extraction company CNOOC – has plans to utilize its offshore installation experience into offshore wind and has announced its plan to develop offshore wind.
Experience and supply chain is required
The increased optimism of the opportunity must be balanced with the relative nascent stage of the local industry. Developers, turbine’s component suppliers, foundation suppliers, and installation equipment manufacturers either currently under-estimate the challenges and timelines or are currently researching new equipment compatible with local and international requirements. This creates an opportunity for experienced international players to chalk out a measured strategy and develop co-operative business models along with the right timing to maximise the opportunity offered by the offshore wind market in China.
Similar need leads to global opportunity
The European WTGs have been able to develop 5-6 MW capacity turbines, which are considered superior in technology to their Chinese counterparts. However, the Chinese WTGs operate on a cost-effective model. In China smaller players such as Shanghai Electric, Dongfang, CSIC Haizhuang & XEMC have developed and currently testing turbines of 5-6 MW. Top four Chinese suppliers Sinovel, Goldwind, United Power and Ming Yang have also developed 5-6.5 MW turbines and shown their intent to aggressive research by announcing involvement in R&D of 10-12 MW capacity. Although, the market is likely to be controlled by local players – the main opportunity for foreign WTGs and component manufacturers to invest in the Chinese market lies in production and supply of downstream products such as control systems, power converters and bearings.
Similarly, in foundations, the needs of the Chinese offshore industry will converge with European foundation technologies. Most projects so far have come up in the regions closer to shore that require multi-pile foundations (due to muddy seabed) compared to projects in Europe where mono-pile foundations are typically used for shallow-water establishments. However, new developments in China are going to push offshore development in deeper waters creating potential for joint collaboration on jacket and tripod collaboration designs. Two biggest players China Longyuan Power Group (Developer) and ZPMC (ship construction company) have joined hands to provide overall offshore wind farm construction equipment and services including foundation and logistics.
Overall, co-operative business model is a win-win situation for both the Chinese companies – which require the sophisticated knowledge – and the European players – which have the experience and the technologies required.
This co-operation will enable European companies to leverage China’s capability to serve as a manufacturing hub of the world and to be a part of the Chinese energy story. The challenge will be to understand and cope with local market conditions and gain access to local customers, which could make formation of joint ventures with local companies the most suitable option for foreign companies.