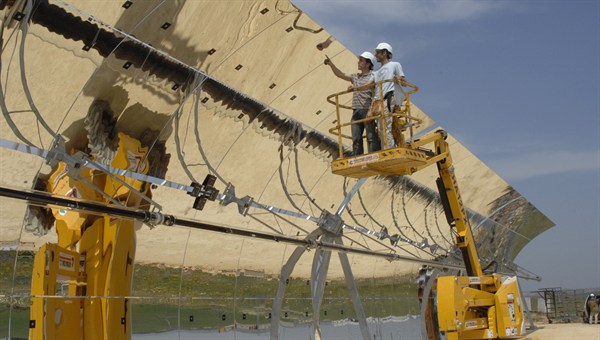 It is for this discovery that he was awarded the DLR Wissenschaftspreis (Award for Contributions made to Science). Since then, he has been the head of Group Systems in the Department of Qualification at the DLR Institute of Solar Research in Almería, southern Spain.

But science is not all that interests this environmental engineer. CSP Services, a spin-off company of the German Aerospace Center (Deutsches Zentrum für Luft- und Raumfahrt; DLR), which specialises in measurement techniques, also makes use of his knowledge and experience. And, whenever he has some spare time, he lets off steam by going to the Andalusian coastal waters with a surfboard in hand.

Marc Röger’s mobile phone beeps announcing the arrival of messages every so often, with information on where the best wind and the best waves for windsurfing are. “During the week, it isn’t too hard for me to ignore them,” the keen surfer says. Rather than heading to the beach from his apartment in Almería, where the beach is more or less his ‘front yard’, he heads off into the Tabernas mountains some 40 minutes away from Almería, where DLR and the Spanish Energy Research Center, Ciemat (Centro de Investigaciones Energéticas, Medioambientales y Tecnológicas), are performing tests at the Plataforma Solar de Almería solar power plant.

Solar power plants can contribute to the secure global supply of power from renewable sources. Röger and his team are developing new measuring techniques that will continue to improve not only the solar power plants themselves, but also their efficiency. Throughout his doctoral thesis, Marc Röger developed a contactless measuring technique to measure the heat transfer between the receiver (where the Sun’s rays are converted into heat) and the air. What was thought to be a mere theory does, in practice, assist in tolerating receiver temperatures in excess of 1000 degrees Celsius without overheating and damaging the materials.

One of the things that Röger and his team are currently measuring is the surfaces of mirrors in solar power plants many square kilometres in size. Power plant operators can adjust the mirrors in such a way that the Sun’s rays shine on the receivers as perfectly as possible. Scientists also keep a close eye on these receivers and analyse the thermal energy transferred and that lost to the environment. In addition to this, Röger and his team are observing the sky. They analyse the amount of radiation actually reaching the power plant, and how much remains in the atmosphere due to dust particles and aerosols. This knowledge is useful for scientists currently planning the construction and development of solar power plants in North Africa and the Middle East. Furthermore, thanks to ‘enerMENA‘, a support and training programme developed by DLR, they are able to educate university professors and other scientists from the region, thus ensuring that their knowledge and expertise is being passed on.

Trip to a service provider

When talking about his school days, Marc Röger recalls: “I wanted to develop techniques that would make our energy supplies sustainable,” so he decided to pursue studies in environmental engineering. Science comes naturally to him. He enjoys getting involved in complicated topics, and finding solutions to complex and tricky issues. It was during the formation of the company CSP Services that Röger discovered his more practical and entrepreneurial side. When the company first started out and was specialising in services and measuring techniques related to the optimisation of solar power plants, Marc Röger was involved in a little bit of everything; he was the development engineer, programmer, systems administrator and even a lorry driver. “It was a very stressful time, but the feeling was great when our measuring system was first rolled out at a big power plant. It is also good to know that a 50-megawatt solar power plant is performing better and able to produce more power in Spain thanks to our expertise.”

Tea under the starry skies of Egypt

Another order placed with the company brought Marc Röger to Egypt, where the company is optimising one of its solar power plants near Cairo. This gave him the opportunity to see the country in a way that most only get to see when they go as tourists. “We stayed in a holiday resort in Cairo, and every morning we would sit at the breakfast table with tourists. After breakfast, we went our separate ways. The other guests went on sightseeing tours, while we went through the industrial area to a facility some 40 kilometres into the desert.” He also reminisces on a nightshift in which the staff had to take care of a system crash shortly before their departure: “That night just flew by. We worked like mad, saved disks and had to rebuild the system before daybreak”. At some point, the night guards and staff responsible for on-site security woke up very surprised. “After a short period of confusion, they invited us for some tea. We sat together around a fire in front of the building on that cold night; above us, a gigantic starry sky.”

Going from the scientific world to working in a company fundamentally changed Röger’s perspective regarding his work. “It was important to see that our research was in demand and just how it was being used.” But in the end, Röger decided to continue developing technology in a research facility, and assumed responsibility for leading a team of researchers at DLR in Almería. He does not get frustrated at the fact that it is not easy to progress and find solutions within academia, nor does it bother him that ideas must always be reconsidered, and sometimes scrapped. “In this regard, I am a rational thinker, which protects against disillusionment.”

Marc Röger has been working for DLR in Almería since 2005. He witnessed the building boom in the coastal town, and now the credit crunch in Spain, which is also affecting him and his DLR colleagues in Almería. It has not gone unnoticed by Röger that fewer and fewer people get together in the bars during the evening over the past few years, and the cost of housing in the region has plummeted horrifically. Many new residential and business premises have been left empty because there are no buyers or tenants. Several of his friends and acquaintances have lost their jobs, and there is little prospect of finding something else that would be adequate. “The current situation has a significant impact on morale. Given that we have relatively secure jobs here at DLR, we sometimes feel as if we have a safety net, safeguarding us from the surrounding areas in Almería.”

That said, Marc Röger still has a lot of Spanish friends there, many of whom are also windsurfers. When he leaves the Tabernas Mountains and heads back to the coast, he checks his mobile to see whether the best windsurfing spots are still being discussed. “At this time, most people agree upon where the best wind and waves are. Now is a good time to make your way down there.” Of course, windsurfing is not Marc Röger’s main priority. Nevertheless, he is rather quite ambitious when it comes to it, and gets angry when he cannot go to the sea for a long time or has to miss training due to business trips. “You have to be 100 percent fit for this sport; otherwise it won’t be long before you are in the water instead of on it.” According to Röger, windsurfing was certainly not the reason why he originally went to Almería, but it is perhaps one of the reasons why he decided to stay.