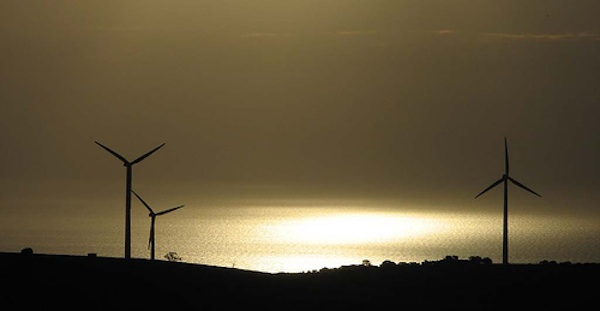 Wind power provides remarkable economic and environmental benefits.  As a result, wind has long earned the support of Republicans and Democrats alike.

That reality has become a nightmare for wind’s competitors, and as a result, people like Marita Noon, guest blogger for the fossil-funded Heartland Institute, have resorted to bullying and naysaying to harm the reputation of wind power.

In a recent blog, Ms. Noon fails time after time in understanding wind’s benefits and the reasons behind wind’s support. Here are some of the major points where Ms. Noon goes wrong:

The Green Tea Party movement in Georgia arose as a result of local citizens wanting to improve their energy reality. Diversifying Georgia’s energy supply with clean, renewable solar power and other renewables makes their grid more secure and will help keep their electric bills low over the long-term.

While wind power is indeed a renewable energy source a majority of Americans want to grow all across the country, this specific group is mostly focused on adding distributed solar generation. By failing to understand this basic premise behind the Georgia Green Tea Party’s actions, Ms. Noon falsely identifies this as an opportunity to attack wind power.

2)    American wind power is, and nearly always has been, a nonpartisan issue. There is nothing partisan about supporting thousands of jobs, attracting billions of dollars in private investment, keeping our air clean, and conserving our water resources. These benefits are spread all across the country, and many of them are concentrated in Republican strongholds.

According to a recent Gallup poll, a majority of Americans (71 percent) support the growth of wind power. State polls from Illinois to North Carolina to Michigan demonstrate that consumers not only support the industry, but want more wind power.

And within the broader population, Republicans support the industry for the same reasons others do: jobs, economic development, savings on electric bills, and the conservation of natural resources.

Wind power supports thousands of jobs, and most of them are in predominantly Republican parts of the country. More than half the nation’s wind-related manufacturing facilities — 341 in all — are located in Republican Congressional districts. With over 60 percent of a typical wind turbine’s value now produced in America (and that number is only growing), there are numerous jobs to be had in the wind energy sector. With the right policies in place, wind power could grow to support roughly 500,000 American jobs.

When the Midwest utility system operator recently (November 23, 2012) obtained more than 25 percent of its electricity from wind, it noted, “Wind [is] one of the fuel choices that helps us manage congestion on the system and ultimately helps keep prices low for our customers and the end-use consumer.”

Conservative support is prevalent not because of any disingenuous messaging, as Ms. Noon suggests; it’s because Republicans, like Americans all across the country, are taking part in wind’s success story.

3)    Ms. Noon fails to understand the reality of the regulated utility monopoly structure that exists across most of the country. The Georgia Tea Party members are rallying against a monopoly of special interests operating in a manner focused on their own bottom line. To be fair, those companies have a legal obligation to maximize revenues for their shareholders. But this often comes at a direct cost to ratepayers.

Adding renewables like solar and wind helps keeps rates low, but also takes a chunk out of the market for their competitors. This basic reality raises the question: what is Ms. Noon and Heartland’s interest in defending the monopoly? They are not defending average ratepayers like you and me.

4)    Federal policy supporting the growth of wind is tax relief, not subsidization. And when attacking the one federal policy that supports wind power, Ms. Noon fails to mention that federal incentives encouraging the growth of various forms of energy are nothing new and have existed for decades.

As far back as the 1920s, many of the incentives for wind’s competitors have existed as permanent features of tax law and represent a lion’s share of government support for energy sources.

For example, the Congressional Budget Office found “only four major tax preferences are permanent, three of which are directed toward fossil fuels and one of which is directed toward nuclear energy.” And a Management Information Services, Inc., report looking at 60 years of energy incentives found that “federal tax concessions for oil and gas are the largest of all incentives, amounting to nearly 80 percent of all tax-related allowances for Energy…Oil and gas received almost 60 percent of federal spending to support energy since 1950.”

Despite having to compete with decades of such advantages, wind power keeps adding more affordable, reliable and clean electricity for millions of homes across America

In the absence of a federal energy policy, the tax code has become America’s de facto energy policy. It has worked well enough to drive the adoption of wind power over 20 percent in Iowa, Kansas, and South Dakota (and over 12 percent in a half-dozen other states) and support local, state, and nation-wide economic development.

Basically, Ms. Noon gets everything wrong about the Production Tax Credit (PTC). The PTC more than compensates for the tax relief it offers in attracting jobs, savings for ratepayers, and billions of dollars invested into the economy annually.

Equipped with a stable PTC from 2005 to 2012, the wind industry brought over $105 billion of private investment into the U.S. economy.  And the PTC more than pays for itself in local, state, and federal taxes over the life of a typical wind project, according to a NextEra Energy Resources analysis.

Finally, Ms. Noon fails to tackle some of the real issues facing America’s energy infrastructure and the policy designed to advance it. There are questions politicians and other leaders should be addressing that actually make sense, and if dealt with honestly could make a real difference in the lives of everyday Americans:

1)    Should America’s energy policy be based on a continued policy of government intervention as it has for decades, providing resources, permanent incentives, and permanent subsidies to coal, nuclear, oil, gas, and most recently unconventional fuels and only limited, temporary assistance to renewable energy? Should we pretend that voluntary transactions between buyer and seller actually take place, rather than being limited to a few deregulated markets?

2)    Can a serious intellectual case be made—setting aside climate concerns — against renewables such as solar and wind, knowing that our conventional energy resources are not infinite, that they still cause damage to our air, our water, and our public health, and that renewable energy is a clean, viable, economical, and domestic option for both current and future energy needs?

3)    In the worst economic crisis of most of our lifetimes, should we be subsidizing any energy generation? And if that answer is “yes,” then why allow the conservative fringe to obfuscate the reality of fossil fuel winners and insist that renewables be losers?

5)    When countries with the best human health and the most material wealth have consistently reduced their per-capita energy consumption over time, why would anyone argue against energy efficiency and renewable energy?