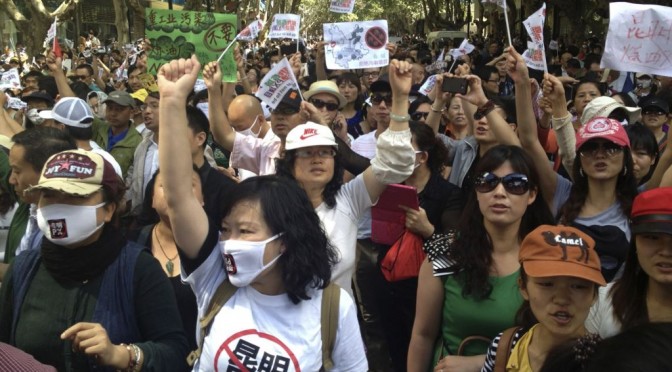 Although China has both official support and the technological capacity for nuclear energy development, emerging public resistance to nuclear projects is an increasing challenge.

China still relies heavily on coal—accounting for 68.5 percent of electricity generation in 2012—because of its lower cost and greater accessibility.

Despite nuclear’s relative safety under normal operations, public concern arises from doubts about the credibility of managers of the state-owned nuclear corporation.

In early April, leading French nuclear company AREVA signed a series of strategic agreements with the China National Nuclear Corporation (CNNC) to foster a strategic civil nuclear partnership between France and China. With presidents Francois Hollande and Xi Jinping in attendance, the two governments finalized a letter of intent to build a facility for treating and recycling spent nuclear fuel in China.

Just three months after the agreement, China cancelled a planned China General Nuclear Power Group (CGN) nuclear fuel processing project in Heshan, Guangdong province, in the wake of opposition from local residents. Although China has both official support and the technological capacity for nuclear energy development, emerging public resistance to nuclear projects is an increasing challenge.

In 2011, nuclear power provided 13 percent of the world’s electricity, but less than 2 percent in China. The country still relies heavily on coal—accounting for 68.5 percent of electricity generation in 2012—because of its lower cost and greater accessibility. Meanwhile, China’s carbon emissions have grown at an average annual rate of 7 percent since 2000, reaching 7.57 billion tons in 2011, according to the International Energy Agency.

In addition to enormous international pressure for emissions reductions, extreme weather in Beijing this past summer prompted China to speed up its emissions reduction process. Because nuclear’s greenhouse gas emissions are low when compared with natural gas and coal, it is often seen as a clean energy alternative. Nuclear also has a relatively low actual electricity generation cost, at 3.0–3.6 cents per kilowatt-hour (kWh), as compared to 8.5 cents per kWh for black coal and 5.1–8.9 cents per kWh for onshore wind power.

Although the Chinese government’s continued support of nuclear power is evident through a  series of multinational contracts signed earlier this year, public resistance to nuclear has increased because of safety concerns, particularly after the 2011 Fukushima incident in Japan. Grassroots campaigns and protests appear to be having a growing impact on China’s ongoing and future nuclear operations.

Among the reasons for low public confidence in nuclear are:

1. Limited communication and local involvement in the project planning process.

In China, the only required procedure for obtaining public feedback in the planning process for a new nuclear facility is a seven-day public notification, as occurred with the Heshan plan. Without any previous announcement or other disclosure of critical projects, public concern is understandable. People tend to assume that there should be no need for the government to hold back early-stage information if a planned project is safe. Given the Chinese government’s history of poor management and even cover-ups of safety issues (including high-profile incidents such as the 2011 Wenzhou high-speed train accident), it is understandable that the Chinese public would question nuclear projects.

2. Lack of transparency in the management and operation of nuclear projects.

Nuclear technology has been a mystery to many Chinese since the construction of the first nuclear plant in Qinshan in 1985. Despite nuclear’s relative safety under normal operations, public concern arises from doubts about the credibility of managers of the state-owned nuclear corporation. The CNNC’s non-transparent bureaucracy rarely reveals to the public the operational condition, maintenance details, and upgrading efforts of nuclear facilities. Although China’s oldest nuclear plant, the Stage I unit at Qinshan, has never experienced a level 2 incident, the lack of managerial and operational information makes it hard for Chinese citizens to trust fully the safety of those facilities.

As the Heshan protests illustrated, Chinese citizens are increasingly able to coordinate civic engagement via social media. During the project’s seven-day public notification period, platforms like Weibo, QQ, and Wechat helped to spread information about the facility much faster than traditional media channels. Such word-of-mouth communications fed public doubt in the absence of trusted information from official sources.

The 2012 user statistics for Weibo (309 million users), Wechat (300 million), and QQ (711 million) indicate a flourishing e-network in China. The public is increasingly involved in discussions about local policymaking and the bureaucratic system. Yet reports suggest that the Chinese government has a negative view of social media, despite acknowledging its power. Instead of using emerging social media platforms to improve governmental disclosure of critical projects, it chooses instead to quash online communication in the name of fighting rumors.

On August 7 of this year, CGN announced its annual open house in a public relations effort to alleviate public concern about its nuclear facility. It remains to be seen, however, whether these efforts to increase the transparency of operations will succeed—and whether they will boost the Chinese public’s support for nuclear or not.