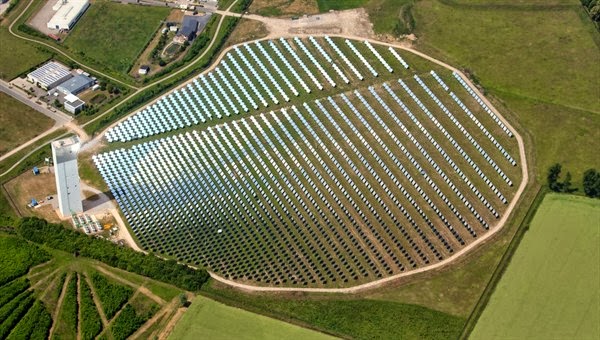 In a concentrated solar power plant, solar radiation is converted into heat in the receiver. The test facility is located on a research level integrated in the tower beneath the main receiver. A new generation of solar receivers, developed under the leadership of DLR, is intended to significantly boost efficiency in the conversion of solar energy into heat and electricity and thus to make the technology more cost effective.

Sunlight is reflected off over 2000 mirrors onto the high-temperature receiver of the power plant tower in Jülich. Researchers at the DLR Institute of Solar Research are pursuing a novel approach in which porous ceramic cubes absorb the solar radiation, converting it into heat and generating temperatures surpassing 700 degrees Celsius. The thermal energy produced is transferred to ambient air, which passes over the receiver and carries the energy to a process within the power plant. By using the constantly available ambient air, this solar receiver offers a particularly high degree of operational robustness and is therefore ideal for use in dry, sunny regions.

The main receiver, a type known as an open volumetric receiver, is mounted at the top of the 60-metre tower in Jülich and already operates using this principle. The efficiency of the overall system was measured for the first time during trials conducted at the solar power plant, which has an electrical output of 1.5 megawatts. “The purpose of this test facility is to continue developing this principle,” says Peter Schwarzbözl, who heads the project at the Institute of Solar Research. “The research level lets us easily modify the test receiver and it also allows the use of extensive metrology to accurately monitor its operation. These are ideal conditions for increasing the efficiency of the technology.”

Over the next two years, the researchers will test finer pores in the honeycomb ceramic structure. They will also investigate ceramic materials that have a sponge-like structure. Both of these innovations will provide very large surfaces for effective thermal exchange with air flowing through. New materials such as metal alloys, allowing even finer porous structures, will also be tested. “High operating temperatures are a major advantage for tower technology, making the conversion of solar energy into electricity very efficient. This advantage will be even clearer if we succeed in further enhancing the receiver efficiency,” says Schwarzbözl. The research project INDUSOL (Industrialisation of Ceramic Solar Components) is being conducted in cooperation with the DLR Institute of Materials Research.

Another research project, SiBopS (Simulationsunterstützte Betriebsoptimierung für Solarturmkraftwerke – simulation-assisted operational optimisation for solar tower power plants), is developing, among other things, a software-based method for optimising the target points at which the mirrors direct the radiation onto a receiver. Here, the test receiver is used mainly to validate the simulation models created over recent years at DLR. The test receiver will then be available for additional projects, targeted at continuing the development of open volumetric receiver technology. The insight this yields will be incorporated into the design of future commercial power plants.

The construction, commissioning and operation of the test facility are being financed by the State of North-Rhine Westphalia and the German Federal Ministry for the Environment, Nature Conservation and Nuclear Safety in accordance with a decision of the German Parliament. Funded by the State of North-Rhine Westphalia, the experimental solar-thermal power plant in Jülich is undergoing further development, incorporating additional facilities constructed in association with partners from industry and research, to become a centre for solar research.